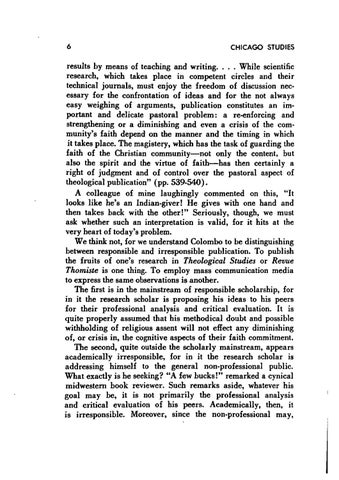 results by means of teaching and writing. . . While scientific research, which takes place in competent circles and their technical journals, must enjoy the freedom of discussion necÂˇ essary for the confrontation of ideas and for the not always easy weighing of arguments, publication constitutes an imÂˇ portant and delicate pastoral problem: a re-enforcing and strengthening or a diminishing and even a crisis of the comÂˇ munity's faith depend on the manner and the timing in which it takes place. The magistery, which has the task of guarding the faith of the Christian community-not only the content, but also the spirit and the virtue of faith-has then certainly a right of judgment and of control over the pastoral aspect of theological publication" (pp. 539-540). A colleague of mine laughingly commented on this, "It looks like he's an Indian-giver! He gives with one hand and then takes hack with the other!" Seriously, though, we must ask whether such an interpretation is valid, for it hits at the very heart of today's problem. We think not, for we understand Colombo to be distinguishing between responsible and irresponsible publication. To publish the fruits of one's research in Theological Studies or Revue Thomiste is one thing. To employ mass communication media to express the same observations is another. The first is in the mainstream of responsible scholarship, for in it the research scholar is proposing his ideas to his peers for their professional analysis and critical evaluation. It is quite properly assumed that his methodical doubt and possible withholding of religious assent will not effect any diminishing of, or crisis in, the cognitive aspects of their faith commitment. The second, quite outside the scholarly mainstream, appears academically irresponsible, for in it the research scholar is addressing himself to the general non-professional public. What exactly is he seeking? "A few bucks!" remarked a cynical midwestern hook reviewer. Such remarks aside, whatever his goal may he, it is not primarily the professional analysis and critical evaluation of his peers. Academically, then, it is irresponsible. Moreover, since the non-professional may,