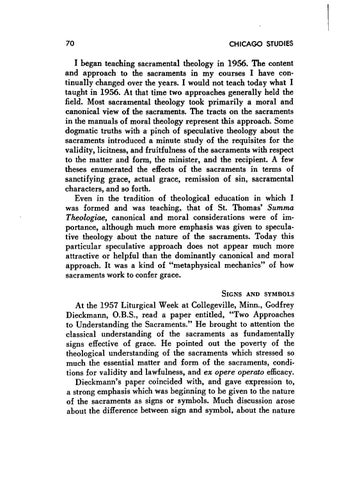 I began teaching sacramental theology in 1956. The content and approach to the sacraments in my courses I have con路 tinually changed over the years. I would not teach today what I taught in 1956. At that time two approaches generally held the field. Most sacramental theology took primarily a moral and canonical view of the sacraments. The tracts on the sacraments in the manuals of moral theology represent this approach. Some dogmatic truths with a pinch of speculative theology about the sacraments introduced a minute study of the requisites for the validity, licitness, and fruitfulness of the sacraments with respect to the matter and form, the minister, and the recipient. A few theses enumerated the effects of the sacraments in terms of sanctifying grace, actual grace, remission of sin, sacramental characters, and so forth. Even in the tradition of theological education in which I was formed and was teaching, that of St. Thomas' Summa Theologiae, canonical and moral considerations were of im路 portance, although much more emphasis was given to specula路 tive theology about the nature of the sacraments. Today this particular speculative approach does not appear much more attractive or helpful than the dominantly canonical and moral approach. It was a kind of "metaphysical mechanics" of how sacraments work to confer grace. SIGNS AND SYMBOLS