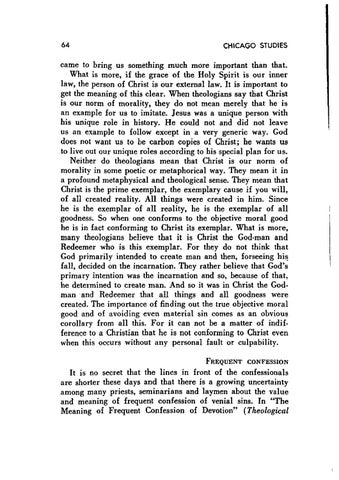 came to bring us something much more important than that. What is more, if the grace of the Holy Spirit is our inner law, the person of Christ is our external law. It is important to get the meaning of this clear. When theologians say that Christ is our norm of morality, they do not mean merely that he is an example for us to imitate. Jesus was a unique person with his unique role in history. He could not and did not leave us an example to follow except in a very generic way. God does not want us to be carbon copies of Christ; be wants us to live out our unique roles according to his special plan for us. Neither do theologians mean that Christ is our norm of morality in some poetic or metaphorical way. They mean it in a profound metaphysical and theological sense. They mean that Christ is the prime exemplar, the exemplary cause if you will, of all created reality. All things were created in him. Since he is the exemplar of all reality, he is the exemplar of all goodness. So when one conforms to the objective moral good he is in fact conforming to Christ its exemplar. What is more, many theologians believe that it is Christ the God-man and Redeemer who is this exemplar. For they do not think that God primarily intended to create man and then, forseeing hi~ fall, decided on the incarnation. They rather believe that God's primary intention was the incarnation and so, because of that, he determined to create man. And so it was in Christ the Godman Âˇand Redeemer that all things and all goodness were created. The importance of finding out the true objective moral good and of avoiding even material sin comes as an obvious corollary from all this. For it can not be a matter of indifference to a Christian that he is not conforming to Christ even when this occurs without any personal fault or culpability. FREQUENT CONFESSION

It is no secret that the lines in front of the confessionals are shorter these days and that there is a growing uncertainty among many priests, seminarians and laymen about the value and meaning of frequent confession of venial sins. In "The Meaning of Frequent Confession of Devotion" (Theological