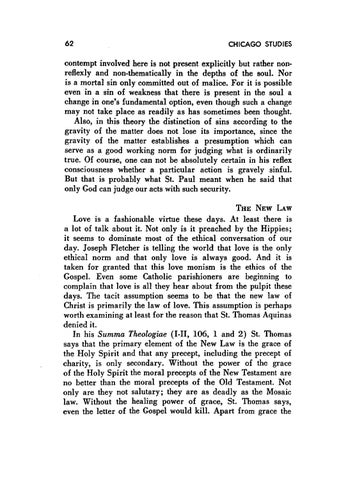 contempt involved here is not present explicitly but rather nonreflexly and non-thematically in the depths of the soul. Nor is a mortal sin only committed out of malice. For it is possible even in a sin of weakness that there is present in the soul a change in one's fundamental option, even though such a change may not take place as readily as has sometimes been thought. Also, in this theory the distinction of sins according to the gravity of the matter does not lose its importance, since the gravity of the matter establishes a presumption which can serve as a good working norm for judging what is ordinarily true. Of course, one can not be absolutely certain in his reflex consciousness whether a particular action is gravely sinful. But that is probably what St. Paul meant when he said that only God can judge our acts with such security. THE NEW LAW

Love is a fashionable virtue these days. At least there is a lot of talk about it. Not only is it preached by the Hippies; it seems to dominate most of the ethical conversation of our day. Joseph Fletcher is telling the world that love is the only ethical norm and that only love is always good. And it is taken for granted that this love monism is the ethics of the Gospel. Even some Catholic parishioners are beginning to complain that love is all they hear about from the pulpit these days. The tacit assumption seems to be that the new law of Christ is primarily the law of love. This assumption is perhaps worth examining at least for the reason that St. Thomas Aquinas denied it. In his Summa Theologiae (I-II, 106, l and 2) St. Thomas says that the primary element of the New Law is the grace of the Holy Spirit and that any precept, including the precept of charity, is only secondary. Without the power of the grace of the Holy Spirit the moral precepts of the New Testament are no better than the moral precepts of the Old Testament. Not only are they not salutary; they are as deadly as the Mosaic law. Without the healing power of grace, St. Thomas says, even the letter of the Gospel would kill. Apart from grace the