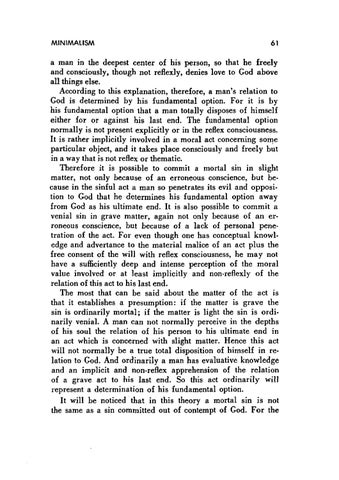 a man in the deepest center of his person, so that he freely and consciously, though not reflexly, denies love to God above all things else. According to this explanation, therefore, a man's relation to God is determined by his fundamental option. For it is by his fundamental option that a man totally disposes of himself either for or against his last end. The fundamental option normally is not present explicitly or in the reflex consciousness. It is rather implicitly involved in a moral act concerning some particular object, and it takes place consciously and freely but in a way that is not reflex or thematic. Therefore it is possible to commit a mortal sin in slight matter, not only because of an erroneous conscience, but because in the sinful act a man so penetrates its evil and opposiÂˇ tion to God that he determines his fundamental option away from God as his ultimate end. It is also possible to commit a venial sin in grave matter, again not only because of an erÂˇ roneous conscience, but because of a lack of personal peneÂˇ !ration of the act. For even though one has conceptual knowledge and advertance to the material malice of an act plus the free consent of the will with reflex consciousness, he rna y not have a sufficiently deep and intense perception of the moral value involved or at least implicitly and non-reflexly of the relation of this act to his last end. The most that can be said about the matter of the act is that it establishes a presumption: if the matter is grave the sin is ordinarily mortal; if the matter is light the sin is ordinarily venial. A man can not normally perceive in the depths of his soul the relation of his person to his ultimate end in an act which is concerned with slight matter. Hence this act will not normally be a true total disposition of himself in relation to God. And ordinarily a man has evaluative knowledge and an implicit and non-reflex apprehension of the relation of a grave act to his last end. So this act ordinarily will represent a determination of his fundamental option. It will be noticed that in this theory a mortal sin is not the same as a sin committed out of contempt of God. For the