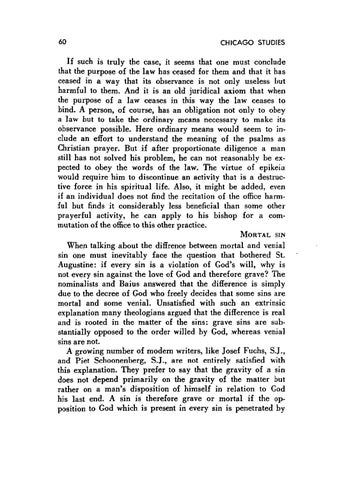 If such is truly the case, it seems that one must conclude that the purpose of the law has ceased for them and that it has ceased in a way that its observance is not only useless but harmful to them. And it is an old juridical axiom that when the purpose of a law ceases in this way the law ceases to bind. A person, of course, has an obligation not only to obey a law but to take the ordinary means necessary to make its observance possible. Here ordinary means would seem to in· elude an effort to understand the meaning of the psalms as Olristian prayer. But if after proportionate diligence a man still has not solved his problem, he can not reasonably be ex· pected to obey the words of the law. The virtue of epikeia would require him to discontinue an activity that is a destruc· live force in his spiritual life. Also, it might be added, even if an individual does not find the recitation of the office harm· ful but finds it considerably less beneficial than some other prayerful activity, he can apply to his bishop for a com· mutation of the office to this other practice. MORTAL SIN

When talking about the diffrence between mortal and venial sin one must inevitably face the question that bothered St. Augustine: if every sin is a violation of God's will, why is not every sin against the love of God and therefore grave? The nominalists and Bains answered that the difference is simply due to the decree of God who freely decides that some sins are mortal and some venial. Unsatisfied with such an extrinsic explanation many theologians argued that the difference is real and is rooted in the matter of the sins: grave sins are substantially opposed to the order willed by God, .whereas venial sins are not. A growing number of modern writers, like Josef Fuchs, S.J., and Piet Schoonenberg, S.J., are not entirely satisfied with this explanation. They prefer to say that the gravity of a sin does not depend primarily on the gravity of the matter but rather on a man's disposition of himself in relation to God his last end. A sin is therefore grave or mortal if the op· position to God which is present in every sin is penetrated by