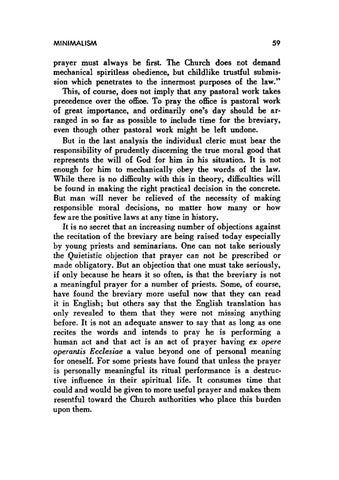 prayer must always be first. The Church does not demand mechanical spiritless obedience, but childlike trustful submisÂˇ sion which penetrates to the innermost purposes of the law," This, of course, does not imply that any pastoral work takes precedence over the offioe. To pray the office is pastoral work of great importance, and ordinarily one's day should be arranged in so far as possible to include time for the breviary, even though other pastoral work might be left undone. But in the last analysis the individual cleric must bear the responsibility of prudently discerning the true moral good that represents the will of God for him in his situation. It is not enough for him to mechanically obey the words of the law. While there is no difficulty with this in theory, difficulties will be found in making the right practical decision in the concrete. But man will never be relieved of the necessity of making responsible moral decisions, no matter how many or how few are the positive laws at any time in history. It is no secret that an increasing number of objections against the recitation of the breviary are being raised today especially by young priests and seminarians. One can not take seriously the Quietistic objection that prayer can not be prescribed or made obligatory. But an objection that one must take seriously, if only because he hears it so often, is that the breviary is not a meaningful prayer for a number of priests. Some, of course, have found the breviary more useful now that they can read it in English; but others say that the English translation has only revealed to them that they were not missing anything before. It is not an adequate answer to say that as long as one recites the words and intends to pray he is performing a human act and that act is an act of prayer having ex opere operantis Ecclesiae a value beyond one of personal meaning for oneself. For some priests have found that unless the prayer is personally meaningful its ritual performance is a destructive influence in their spiritual life. It consumes time that could and would be given to more useful prayer and makes them resentful toward the Church authorities who place this burden upon them.