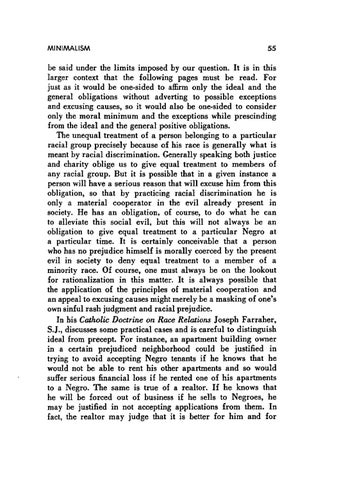 be said under the limits imposed by our question. It is in this larger context that the following pages must be read. For just as it would be one-sided to affirm only the ideal and the general obligations without adverting to possible exceptions and excusing causes, so it would also be one-sided to consider only the moral minimum and the exceptions while prescinding from the ideal and the general positive obligations. The unequal treatment of a person belonging to a particular racial group precisely because of his race is generally what is meant by racial discrimination. Generally speaking both justice and charity oblige us to give equal treatment to members of any racial group. But it is possible that in a given instance a person will have a serious reason that will excuse him from this obligation, so that by practicing racial discrimination he is only a material cooperator in the evil already present in society. He has an obligation, of course, to do what he can to alleviate this social evil, but this will not always be an obligation to give equal treatment to a particular Negro at a particular time. It is certainly conceivable that a person who has no prejudice himself is morally coerced by the present evil in society to deny equal treatment to a member of a minority race. Of course, one must always be on the lookout for rationalization in this matter. It is always possible that the application of the principles of material cooperation and an appeal to excusing causes might merely be a masking of one's own sinful rash judgment and racial prejudice. In his Catholic Doctrine on Race Relations Joseph Farraher, S.J., discusses some practical cases and is careful to distinguish ideal from precept. For instance, an apartment building owner in a certain prejudiced neighborhood could be justified in trying to avoid accepting Negro tenants if he knows that he would not be able to rent his other apartments and so would suffer serious financial loss if he rented one of his apartments to a Negro. The same is true of a realtor. If he knows that he will be forced out of business if he sells to Negroes, be may be justified in not accepting applications from them. In fact, the realtor may judge that it is better for him and for