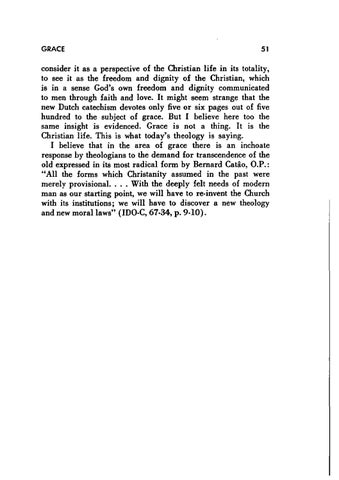 consider it as a perspective of the Christian life in its totality, to see it as the freedom and dignity of the Christian, which is in a sense God's own freedom and dignity communicated to men through faith and love. It might seem strange that the new Dutch catechism devotes only five or six pages out of five hundred to the subject of grace. But I believe here too the same insight is evidenced. Grace is not a thing. It is the Christian life. This is what today's theology is saying. I believe that in the area of grace there is an inchoate response by theologians to the demand for transcendence of the old expressed in its most radical form by Bernard Catiio, O.P.: "All the forms which Christanity assumed in the past were merely provisional. ... With the deeply felt needs of modem man as our starting point, we will have to re-invent the Church with its institutions; we will have to discover a new theology and new moral laws" (IDOÂˇC, 67-34, p. 9-10).