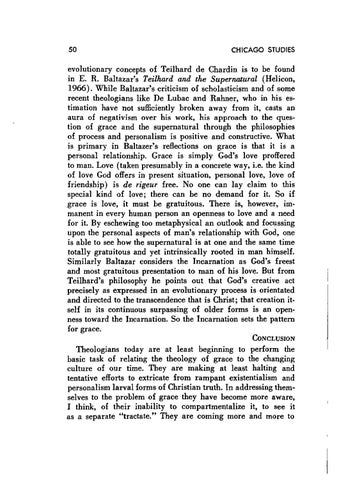 evolutionary concepts of Teilhard de Chardin is to be found in E. R. Baltazar's Teilhard and the Supernatural (Helicon, 1966). While Baltazar's criticism of scholasticism and of some recent theologians like De Lubac and Rahner, who in his estimation have not sufficiently broken away from it, casts an aura of negativism over his work, his approach to the question of grace and the supernatural through the philosophies of process and personalism is positive and constructive. What is primary in Baltazer's reflections on grace is that it is a personal relationship. Grace is simply God's love proffered to man. Love (taken presumably in a concrete way, i.e. the kind of love God offers in present situation, personal love, love of friendship) is de rigeur free. No one can lay claim to this special kind of love; there can be no demand for it. So if grace is love, it must be gratuitous. There is, however, imÂˇ manent in every human person an openness to love and a need for it. By eschewing too metaphysical an outlook and focussing upon the personal aspects of man's relationship with God, one is able to see how the supernatural is at one and the same time totally gratuitous and yet intrinsically rooted in man himself. Similarly Baltazar considers the Incarnation as God's freest and most gratuitous presentation to man of his love. But from Teilhard's philosophy he points out that God's creative act precisely as expressed in an evolutionary process is orientated and directed to the transcendence that is Christ; that creation itself in its continuous surpassing of older forms is an openÂˇ ness toward the Incarnation. So the Incarnation sets the pattern for grace. CoNCLUSION

Theologians today are at least beginning to perform the basic task of relating the theology of grace to the changing culture of our time. They are making at least halting and tentative efforts to extricate from rampant existentialism and personalism larval forms of Christian truth. In addressing themselves to the problem of grace they have become more aware, I think, of their inability to compartmentalize it, to see it as a separate "tractate." They are coming more and more to