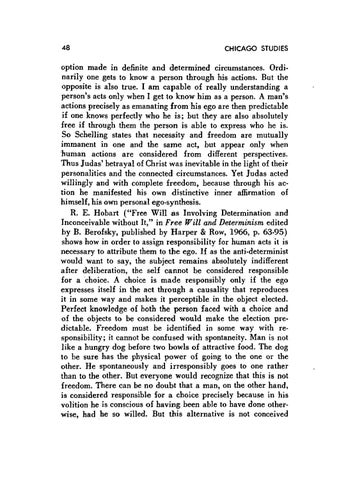 option made in definite and determined circumstances. Ordi路 narily one gets to know a person through his actions. But the opposite is also true. I am capable of really understanding a person's acts only when I get to know him as a person. A man's actions precisely as emanating from his ego are then predictable if one knows perfectly who he is; but they are also absolutely free if through them the person is able to express who he is. So Schelling states that necessity and freedom are mutually immanent in one and the same act, but appear only when human actions are considered from different perspectives. Thus Judas' betrayal of Christ was inevitable in the light of their personalities and the connected circumstances. Yet Judas acted willingly and with complete freedom, because through his ac路 tion he manifested his own distinctive inner affirmation of himself, his own personal ego-synthesis. R. E. Hobart ("Free Will as Involving Determination and Inconceivable without It," in Free Will and Determinism edited by B. Berofsky, published by Harper & Row, 1966, p. 63-95) shows how in order to assign responsibility for human acts it is necessary to attribute them to the ego. If as the anti-determinist would want to say, the subject remains absolutely indifferent after deliberation, the self cannot be considered responsible for a choice. A choice is made responsibly only if the ego expresses itself in the act through a causality that reproduces it in some way and makes it perceptible in the object elected. Perfect knowledge of both the person faced with a choice and of the objects to be considered would make the election predictable. Freedom must be identified in some way with re路 sponsibility; it cannot be confused with spontaneity. Man is not like a hungry dog before two bowls of attractive food. The dog to be sure has the physical power of going to the one or the other. He spontaneously and irresponsibly goes to one rather than to the other. But everyone would recognize that this is not freedom. There can be no doubt that a man, on the other hand, is considered responsible for a choice precisely because in his volition he is conscious of having been able to have done other路 wise, had he so willed. But this alternative is not conceived