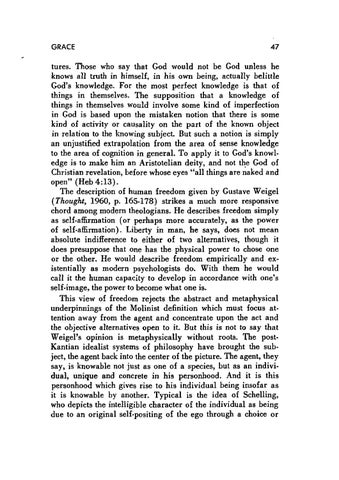 tures. Those who say that God would not be God unless he knows all truth in himself, in his own being, actually belittle God's knowledge. For the most perfect knowledge is that of things in themselves. The supposition that a knowledge of things in themselves would involve some kind of imperfection in God is based upon the mistaken notion that there is some kind of activity or causality on the part of the known object in relation to the knowing subject. But such a notion is simply an unjustified extrapolation from the area of sense knowledge to the area of cognition in general. To apply it to God's knowledge is to make him an Aristotelian deity, and not th_e God of Christian revelation, before whose eyes "all things are naked and open" (Heb 4:13). The description of human freedom given by Gustave Weigel (Thought, 1960, p. 165-178) strikes a much more responsive chord among modem theologians. He describes freedom simply as self-affirmation (or perhaps more accurately, as the power of self-affirmation). Liberty in man, he says, does not mean absolute indifference to either of two alternatives, though it does presuppose that one has the physical power to chose one or the other. He would describe freedom empirically and existentially as modern psychologists do. With them he would call it the human capacity to develop in accordance with one's self-image, the power to become what one is. This view of freedom rejects the abstract and metaphysical underpinnings of the Molinist definition which must focus attention away from the agent and concentrate upon the act and the objective alternatives open to it. But this is not to say that Weigel's opinion is metaphysically without roots. The postKantian idealist systems of philosophy have brought the subject, the agent back into the center of the picture. The agent, they say, is knowable not just as one of a species, but as an individual, unique and concrete in his personhood. And it is this personhood which gives rise to his individual being insofar as it is knowable by another. Typical is the idea of Schelling, who depicts the intelligible character of the individual as being due to an original self-positing of the ego through a choice or