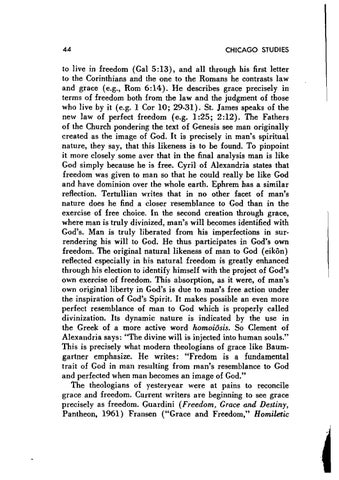 to live in freedom (Gal 5:13), and all through his first letter to the Corinthians and the one to the Romans he contrasts Ia w and grace (e.g., Rom 6:14). He describes grace precisely in terms of freedom both from the law and the judgment of those who live by it (e.g. I Cor 10; 29-31). St. James speaks of the new law of perfect freedom (e.g. 1:25; 2:12). The Fathers of the Church pondering the text of Genesis see man originally created as the image of God. It is precisely in man's spiritual nature, they say, that this likeness is to be found. To pinpoint it more closely some aver that in the final analysis man is like God simply because he is free. Cyril of Alexandria states that freedom was given to man so that he could really be like God and have dominion over the whole earth. Ephrem has a similar reflection. Tertullian writes that in no other facet of man's nature does he find a closer resemblance to God than in the exercise of free choice. In the second creation through grace, where man is truly divinized, man's will becomes identified with God's. Man is truly liberated from his imperfections in surÂˇ rendering his will to God. He thus participates in God's own freedom. The original natural likeness of man to God ( eikon) reflected especial! y in his natural freedom is greatly enhanced through his election to identify himself with the project of God's own exercise of freedom. This absorption, as it were, of man's own original liberty in God's is due to man's free action under the inspiration of God's Spirit. It makes possible an even more perfect resemblance of man to God which is properly called divinization. Its dynamic nature is indicated by the use in the Greek of a more active word homoiOsis. So Clement of Alexandria says: "The divine will is injected into human souls." This is precisely what modern theologians of grace like Baumgartner emphasize. He writes: "Fred om is a fundamental trait of God in man resulting from man's resemblance to God and perfected when man becomes an image of God." The theologians of yesteryear were at pains to reconcile grace and freedom. Current writers are beginning to see grace precisely as freedom. Guardini (Freedom, Grace and Destiny, Pantheon, 1961) Fransen ("Grace and Freedom," Homiletic