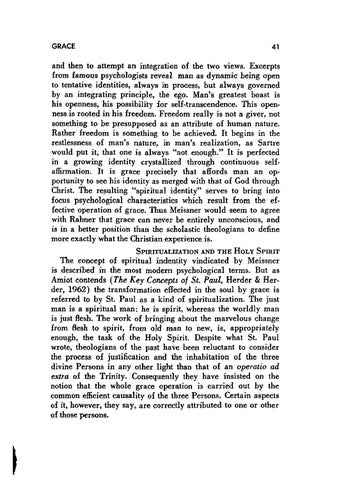 and then to attempt an integration of the two views. Excerpts from famous psychologists reveal man as dynamic being open to tentative identities, always in process, hut always governed by an integrating principle, the ego. Man's greatest boast is his openness, his possibility for self-transcendence. This open路 ness is rooted in his freedom. Freedom really is not a giver, not something to be presupposed as an attribute of human nature. Rather freedom is something to be achieved. It begins in the restlessness of man's nature, in man's realization, as Sartre would put it, that one is always "not enough." It is perfected in a growing identity crystallized through continuous self路 affirmation. It is grace precisely that affords man an op路 portunity to see his identity as merged with that of God through Christ. The re~ulting "spiritual identity" serves to bring into focus psychological characteristics which result from the ef路 fective operation of grace. Thus Meissner would seem to agree with Rahner that grace can never be entirely unconscious, and is in a better position than the scholastic theologians to define more exactly what the Christian experience is. SPIRITUALIZATION AND THE HOLY SPIRIT

The concept of spiritual indentity vindicated by Meissner is described in the most modem psychological terms. But as Amiot contends (The Key Concepts of St. Paul, Herder & Herder, 1962) the transformation effected in the soul by grace is referred to by St. Paul as a kind of spiritualization. The just man is a spiritual man: he is spirit, whereas the worldly man is just flesh. The work of bringing about the marvelous change from flesh to spirit, from old man to new, is, appropriately enough, the task of the Holy Spirit. Despite what St. Paul wrote, theologians of the past have been reluctant to consider the process of justification and the inhabitation of the three divine Persons in any other light than that of an operatio ad extra of the Trinity. Consequently they have insisted on the notion that the whole grace operation is carried out by the common efficient causality of the three Persons. Certain aspects of it, however, they say, are correctly attributed to one or other of those persons.