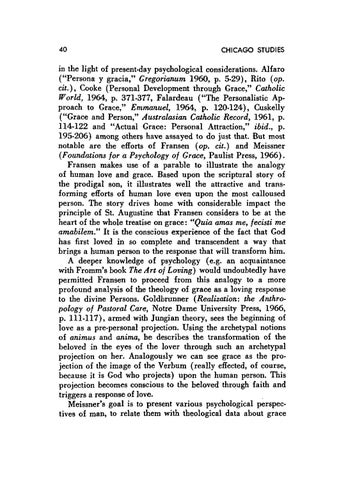 in the light of present-day psychological considerations. Alfaro ("Persona y gracia," Gregorianum 1960, p. 5-29), Rito (op. cit.), Cooke (Personal Development through Grace," Catholic World, 1964, p. 371-377, Falardeau ("The Personalistic Approach to Grace," Emmanuel, 1964, p. 120-124), Cuskelly ("Grace and Person," Australasian Catholic Record, 1961, p. 114-122 and "Actual Grace: Personal Attraction," ibid., p. 195-206) among others have assayed to do just that. But most notable are the efforts of Fransen ( op. cit.) and Meissner (Foundations for a Psychology of Grace, Paulist Press, 1966). Fransen makes use of a parable to illustrate the analogy of human love and grace. Based upon the scriptural story of the prodigal son, it illustrates well the attractive and transÂˇ forming efforts of human love even upon the most calloused person. The story drives home with considerable impact the principle of St. Augustine that Fransen considers to be at the heart of the whole treatise on grace: "Quia amas me, fecisti me amabilem." It is the conscious experience of the fact that God has first loved in so complete and transcendent a way that brings a human person to the response that will transform him. A deeper knowledge of psychology (e.g. an acquaintance with Fromm's book The Art of Loving) would undoubtedly have permitted Fransen to proceed from this analogy to a more profound analysis of the theology of grace as a loving response to the divine Persons. Goldbrunner (Realization: the Anthropology of Pastoral Care, Notre Dame University Press, 1966, p. 111-117), armed with Jungian theory, sees the beginning of love as a pre-personal projection. Using the archetypal notions of animus and anima, be describes the transformation of the beloved in the eyes of the lover through such an archetypal projection on her. Analogously we can see grace as the projection of the image of the Verbum (really effected, of course, because it is God who projects) upon the human person. This projection becomes conscious to the beloved through faith and triggers a response of love. Meissner's goal is to present various psychological perspectives of man, to relate them with theological data about grace