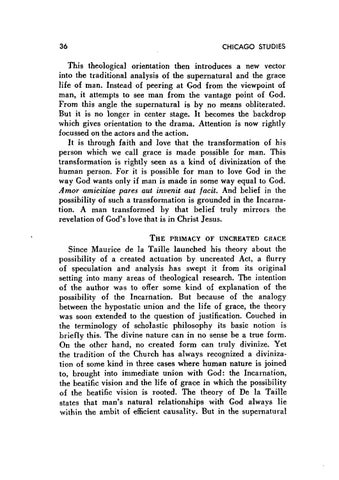 This theological orientation then introduces a new vector into the traditional analysis of the supernatural and the grace life of man. Instead of peering at God from the viewpoint of man, it attempts to see man from the vantage point of God. From this angle the supernatural is by no means obliterated. But it is no longer in center stage. It becomes the backdrop which gives orientation to the drama. Attention is now rightly focussed on the actors and the action. It is through faith and love that the transformation of his person which we call grace is made possible for man. This transformation is rightly seen as a kind of divinization of the human person. For it is possible for man to love God in the way God wants only if man is made in some way equal to God. Amor amicitiae pares aut invenit aut facit. And belief in the possibility of such a transformation is grounded in the Incarnation. A man transformed by that belief truly mirrors the revelation of God's love that is in Christ Jesus. THE PRIMACY OF UNCREATED GRACE

Since Maurice de la Taille launched his theory about the possibility of a created actuation by uncreated Act, a flurry of speculation and analysis has swept it from its original setting into many areas of theological research. The intention of the author was to offer some kind of explanation of the possibility of the Incarnation. But because of the analogy between the hypostatic union and the life of grace, the theory was soon extended to the question of justification. Couched in the terminology of scholastic philosophy its basic notion is briefly this. The divine nature can in no sense be a true form. On the other hand, no created form can truly divinize. Yet the tradition of the Church has always recognized a divinization of some kind in three cases where human nature is joined to, brought into immediate union with God: the Incarnation, the beatific vision and the life of grace in which the possibility of the beatific vision is rooted. The theory of De la Taille states that man's natural relationships with God always lie within the ambit of efficient causality. But in the supernatural