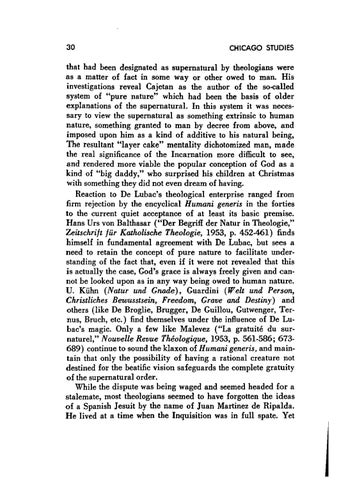 that had been designated as supernatural by theologians were as a matter of fact in some way or other owed to man. His investigations reveal Cajetan as the author of the so-called system of "pure nature" which had been the basis of older explanations of the supernatural. In this system it was necessary to view the supernatural as something extrinsic to human nature, something granted to man by decree from above, and imposed upon him as a kind of additive to his natural being, The resultant "layer cake" mentality dichotomized man, made the real significance of the Incarnation more difficult to see, and rendered more viable the popular conception of God as a kind of "big daddy," who surprised his children at Christmas with something they did not even dream of having. Reaction to De Lubac's theological enterprise ranged from firm rejection by the encyclical H umani generis in the forties to the current quiet acceptance of at least its basic premise. Hans Urs von Balthasar ("Der Begrifi der Natur in Theologie," Zeitschrift fur Katholische Theologie, 1953, p. 452-461) finds himself in fundamental agreement with De Lubac, but sees a need to retain the concept of pure nature to facilitate understanding of the fact that, even if it were not revealed that this is actually the case, God's grace is always freely given and cannot be looked upon as in any way being owed to human nature. U. Kiihn (Natur und Gnode), Guardini (Welt und Person, Christliches Bewusstsein, Freedom, Grave and Destiny) and others (like De Broglie, Brugger, De Guillou, Gutwenger, Ternus, Bruch, etc.) find themselves under the influence of De Lubac's magic. Only a few like Malevez ("La gratuite du surnature!," Nouvelle Revue Theologique, 1953, p. 561-586; 673689) continue to sound the klaxon of H umani generis, and maintain that only the possibility of having a rational creature not destined for the beatific vision safeguards the complete gratuity of the supernatural order. While the dispute was being waged and seemed headed for a stalemate, most theologians seemed to have forgotten the ideas of a Spanish Jesuit by the name of Juan Martinez de Ripalda. He lived at a time when the Inquisition was in full spate. Yet