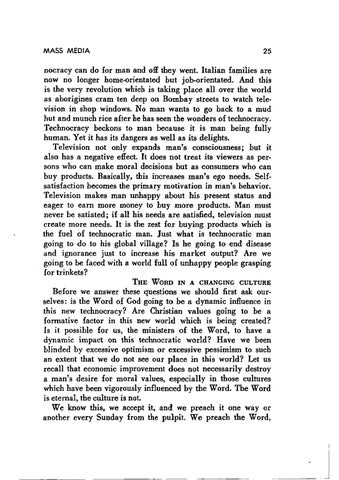 nocracy can do for man and off they went. Italian families are now no longer home-orientated hut job-orientated. And this is the very revolution which is taking place all over the world as aborigines cram ten deep on Bombay streets to watch television in shop windows. No man wants to go back to a mud hut and munch rice after he has seen the wonders of technocracy. Technocracy beckons to man because it is man being fully human. Yet it has its dangers as well as its delights. Television not only expands man's consciousness; but it also has a negative effect. It does not treat its viewers as persons who can make moral decisions but as consumers who can buy products. Basically, this increases man's ego needs. Selfsatisfaction becomes the primary motivation in man's behavior. Television makes man unhappy about his present status and eager to earn more money to buy more products. Man must never be satiated; if all his needs are satisfied, television must create more needs. It is the zest for buying products which is the fuel of technocratic man. Just what is technocratic man going to do to his global village? Is he going to end disease and ignorance just to increase his market output? !ue we going to be faced with a world full of unhappy people grasping for trinkets? THE WoRD IN A CHANGING CULTURE Before we answer these questions we should first ask ourselves: is the Word of God going to be a dynamic influence in this new technocracy? Aie Christian values going to be a formative factor in this new world which is being created? Is it possible for us, the ministers of the Word, to have a dynamic impact on this technocratic world? Have we been blinded by excessive optimism or excessive pessimism to such an extent that we do not see our place in this world? Let us recall that economic improvement does not necessarily destroy a man's desire for moral values, especially in those cultures which have been vigorously influenced by the Word. The Word is eternal, the culture is not. We know this, we accept it, and we preach it one way or another every Sunday from the pulpit. We preach the Word,