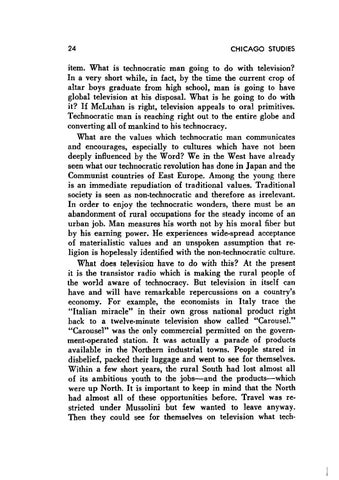 item. What is technocratic man going to do with television? In a very short while, in fact, by the time the current crop of altar boys graduate from high school, man is going to have global television at his disposal. What is he going to do with it? If McLuhan is right, television appeals to oral primitives. Technocratic man is reaching right out to the entire globe and converting all of mankind to his technocracy. What are the values which technocratic man communicates and encourages, especially to cultures which have not been deeply influenced by the Word? We in the West have already seen what our technocratic revolution has done in Japan and the Communist countries of East Europe. Among the young lhere is an immediate repudiation of traditional values. Traditional society is seen as non-technocratic and therefore as irrelevant. In order to enjoy the technocratic wonders, there must be an abandonment of rural occupations for the steady income of an urban job. Man measures his worth not by his moral fiber but by his earning power. He experiences wide-spread acceptance of materialistic values and an unspoken assumption that re· ligion is hopelessly identified with the non-technocratic culture. What does television have to do with this? At the present it is the transistor radio which is making the rural people of the world aware of technocracy. But television in itself can have and will have remarkable repercussions on a country's economy. For example, the economists in Italy trace the "Italian miracle" in their own gross national product right back to a twelve-minute television show called "Carousel." "Carousel" was the only commercial permitted on the govern· ment·operated station. It was actually a parade of products available in the Northern industrial towns. People stared in disbelief, packed their luggage and went to see for themselves. Within a few short years, the rural South had lost almost all of its ambitious youth to the jobs-and the products-which were up North. It is important to keep in mind that the North had almost all of these opportunities before. Travel was re· stricted under Mussolini but few wanted to leave anyway. Then they could see for themselves on television what tech·