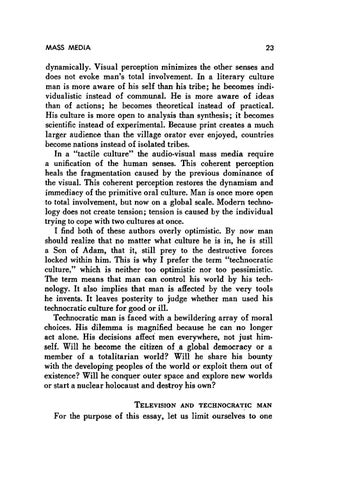 dynamically. Visual perception minimizes the other senses and does not evoke man's total involvement. In a literary culture man is more aware of his self than his tribe; he becomes individualistic instead of communal. He is more aware of ideas than of actions; he becomes theoretical instead of practical. His culture is more open to analysis than synthesis; it becomes scientific instead of experimental. Because print creates a much larger audience than the village orator ever enjoyed, countries become nations instead of isolated tribes. In a "tactile culture" the audio-visual mass media require a unification of the human senses. This coherent perception heals the fragmentation caused by the previous dominance of the visual. This coherent perception restores the dynamism and immediacy of the primitive oral culture. Man is once more open to total involvement, but now on a global scale. Modern technology does not create tension; tension is caused by the individual trying to cope with two cultures at once. I find both of these authors overly optimistic. By now man should realize that no matter what culture he is in, he is still a Son of Adam, that it, still prey to the destructive forces locked within him. This is why I prefer the term "technocratic culture," which is neither too optimistic nor too pessimistic. The term means that man can control his world by his technology. It also implies that man is affected by the very tools he invents. It leaves posterity to judge whether man used his technocratic culture for good or ill. Technocratic man is faced with a bewildering array of moral choices. His dilemma is magnified because he can no longer act alone. His decisions affect men everywhere, not just himself. Will he become the citizen of .a global democracy or a member of a totalitarian world? Will he share his bounty with the developing peoples of the world or exploit them out of existence? Will he conquer outer space and explore new worlds or start a nuclear holocaust and destroy his own? TELEVISION AND TECHNOCRATIC MAN

For the purpose of this essay, let us limit ourselves to one