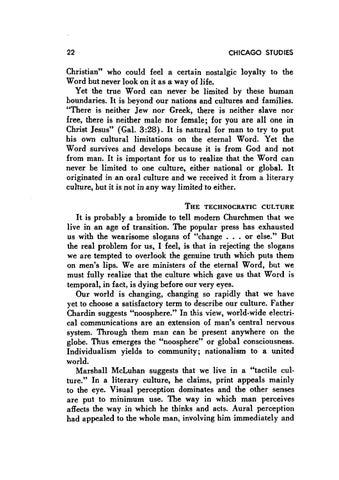 Christian" who could feel a certain nostalgic loyalty to the Word but never look on it as a way of life. Yet the true Word can never be limited by these human boundaries. It is beyond our nations and cultures and families. "There is neither Jew nor Greek, there is neither slave nor free, there is neither male nor female; for you are all one in Christ Jesus" (Gal. 3:28). It is natural for man to try to put his own cultural limitations on the eternal Word. Yet the Word survives and develops because it is from God and not from man. It is important for us to realize that the Word can never be limited to one culture, either national or global. It originated in an oral culture and we received it from a literary culture, but it is not in any way limited to either. THE TECHNOCRATIC CULTURE

It is probably a bromide to tell modern Churchmen that we live in an age of transition. The popular press has exhausted us with the wearisome slogans of "change . . . or else." But the real problem for us, I feel, is that in rejecting the slogans we are tempted to overlook the genuine truth which puts them on men's lips. We are ministers of the eternal Word, but we must fully realize that the culture which gave us that Word is temporal, in fact, is dying before our very eyes. Our world is changing, changing so rapidly that we have yet to choose a satisfactory term to describe our culture. Father Chardin suggests "noosphere." In this view, world-wide electriÂˇ cal communications are an extension of man's central nervous system. Through them man can be present anywhere on the globe. Thus emerges the "noosphere" or global consciousness. Individualism yields to community; nationalism to a united world. Marshall McLuhan suggests that we live in a "tactile cuiÂˇ ture." In a literary culture, he claims, print appeals mainly to the eye. Visual perception dominates and the other senses are put to minimum use. The way in which man perceives affects the way in which he thinks and acts. Aural perception had appealed to the whole man, involving him immediately and