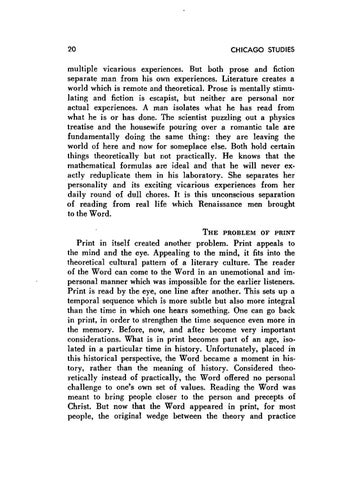 multiple vicarious experiences. But both prose and fiction separate man from his own experiences. Literature creates a world which is remote and theoretical. Prose is mentally stimu· lating and fiction is escapist, but neither are personal nor actual experiences. A man isolates what he has read from what he is or has done. The scientist puzzling out a physics treatise and the housewife pouring over a romantic tale are fundamentally doing the same thing: they are leaving the world of here and now for someplace else. Both hold certain things theoretically but not practically. He knows that the mathematical formulas are ideal and that he will never ex· actly reduplicate them in his laboratory. She separates her personality and its exciting vicarious experiences from her daily round of dull chores. It is this unconscious separation of reading from real life which Renaissance men brought to the Word. THE PROBLEM OF PRINT

Print in itself created another problem. Print appeals to the mind and the eye. Appealing to the mind, it fits into the theoretical cultural pattern of a literary culture. The reader of the Word can come to the Word in an unemotional and im· personal manner which was impossible for the earlier listeners. Print is read by the eye, one line after another. This sets up a temporal sequence which is more subtle but also more integral than the time in which one hears something. One can go back in print, in order to strengthen the time sequence even more in the memory. Before, now, and after become very important considerations. What is in print becomes part of an age, iso· lated in a particular time in history. Unfortunately, placed in this historical perspective, the Word became a moment in his· tory, rather than the meaning of history. Considered theo· 1·etically instead of practically, the Word offered no personal challenge to one's own set of values. Reading the Word was meant to bring people closer to the person and precepts of Christ. But now that the Word appeared in print, for most people, the original wedge between the theory and practice