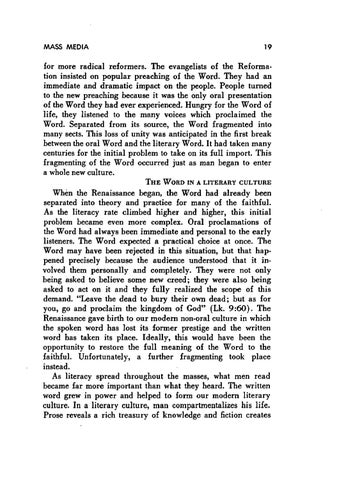 for more radical reformers. The evangelists of the ReformsÂˇ tion insisted on popular preaching of the Word. They had an immediate and dramatic impact on the people. People turned to the new preaching because it was the only oral presentation of the Word they had ever experienced. Hungry for the Word of life, they listened to the many voices which proclaimed the Word. Separated from its source, the Word fragmented into many sects. This loss of unity was anticipated in the first break between the oral Word and the literary Word. It had taken many centuries for the initial problem to take on its full import. This fragmenting of the Word occurred just as man began to enter a whole new culture. THE WORD IN A LITERARY CULTURE

Whim the Renaissance began, the Word had already been separated into theory and practice for many of the faithful. As the literacy rate climbed higher and higher, this initial problem became even more complex. Oral proclamations of the Word had always been immediate and personal to the early listeners. The Word expected a practical choice at once. The Word may have been rejected in this situation, but that hapÂˇ pened precisely because the audience understood that it inÂˇ volved them personally and completely. They were not only being asked to believe some new creed; they were also being asked to act on it and they fully realized the scope of this demand. "Leave the dead to bury their own dead; but as for you, go and proclaim the kingdom of God" (Lk. 9:60). The Renaissance gave birth to our modem non-oral culture in which the spoken word has lost its former prestige and the written word has taken its place. Ideally, this would have been the opportunity to restore the full meaning of the Word to the faithful. Unfortunately, a further fragmenting took place instead. As literacy spread throughout the masses, what men read became far more important than what they heard. The written word grew in power and helped to form our modem literary culture. In a literary culture, man compartmentalizes his life. Prose reveals a rich treasury of knowledge and fiction creates