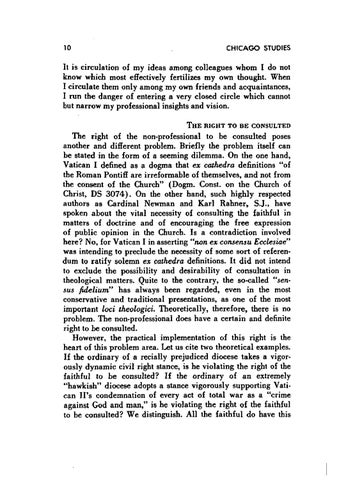 It is circulation of my ideas among colleagues whom I do not know which most effectively fertilizes my own thought. When I circulate them only among my own friends and acquaintances, I run the danger of entering a very closed circle which cannot but narrow my professional insights and vision. THE RIGHT TO BE CONSULTED

The right of the non-professional to be consulted poses another and different problem. Briefly the problem itself can be stated in the form of a seeming dilemma. On the one hand, Vatican I defined as a dogma that ex ctahedra definitions "of the Roman Pontiff are irreformable of themselves, and not from the consent of the Church" (Dogm. Const. on the Church of Christ, DS 3074). On the other hand, such highly respected authors as Cardinal Newman and Karl Rahner, S.J., have spoken about the vital necessity of consulting the faithful in matters of doctrine and of encouraging the free expression of public opinion in the Church. Is a contradiction involved here? No, for Vatican I in asserting "non ex consensu Ecclesiae" was intending to preclude the necessity of some sort of referendum to ratify solemn ex cathedra definitions. It did not intend to exclude the possibility and desirability of consultation in theological matters. Quite to the contrary, the so-called "sensus fidelium" has always been regarded, even in the most conservative and traditional presentations, as one of the most important loci theologici. Theoretically, therefore, there is no problem. The non-professional does have a certain and definite right to be consulted. However, the practical implementation of this right is the heart of this problem area. Let us cite two theoretical examples. If the ordinary of a recially prejudiced diocese takes a vigorously dynamic civil right stance, is he violating the right of the faithful to be consulted? If the ordinary of an extremely "hawkish" diocese adopts a stance vigorously supporting VatiÂˇ can Il's condemnation of every act of total war as a "crime against God and man," is he violating the right of the faithful to be consulted? We distinguish. All the faithful do have this