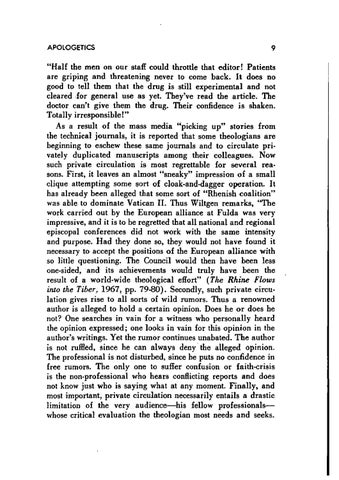 "Half the men on our staff could throttle that editor! Patients are griping and threatening never to come back. It does no good to tell them that the drug is still experimental and not cleared .for general use as yet. They've read the article. The doctor can't give them the drug. Their confidence is shaken. Totally irresponsible!" As a result of the mass media "picking up" stories from the technical journals, it is reported that some theologians are beginning to eschew these same journals and to circulate pri路 vately duplicated manuscripts among their colleagues. Now such private circulation is most regrettable for several rea路 sons. First, it leaves an almost "sneaky" impression of a small clique attempting some sort of cloak-and-dagger operation. It has already been alleged that some sort of "Rhenish coalition" was able to dominate Vatican II. Thus Wiltgen remarks, "The work carried out by the European alliance at Fulda was very impressive, and it is to be regretted that all national and regional episcopal conferences did not work with the same intensity and purpose. Had they done so, they would not have found it necessary to accept the positions of the European alliance with so little questioning. The Council would then have been less one-sided, and its achievements would truly have been the result of a world-wide theological effort" (The Rhine Flows into the Tiber, 1967, pp. 79-80). Secondly, such private circu路 lation gives rise to all sorts of wild rumors. Thus a renowned author is alleged to hold a certain opinion. Does he or does he not? One searches in vain for a witness who personally heard the opinion expressed; one looks in vain for this opinion in the author's writings. Yet the rumor continues unabated. The author is not ruffled, since he can always deny路 the alleged opinion. The professional is not disturbed, since he puts no confidence in free rumors. The only one to suffer confusion or faith-crisis is the non-professional who hears conflicting reports and does not know just who is saying what at any moment. Finally, and most important, private circulation necessarily entails a drastic limitation of the very audience-his fellow professionals-whose critical evaluation the theologian most needs and seeks.