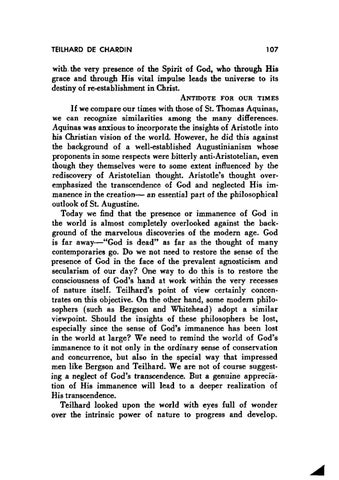 with. the very presence of the Spirit of God, who through His grace and through His vital impulse leads the universe to its destiny of re-establishment in Christ. ANTIDOTE FOR OUR TIMES

If we compare our times with those of St. Thomas Aquinas, we can recognize similarities among the many differences. Aquinas was anxious to incorporate the insights of Aristotle into his Christian vision of the world. However, he did this against the background of a well-established Augustinianism whose proponents in some respects were bitterly anti-Aristotelian, even though they themselves were to some extent influenced by the rediscovery of Aristotelian thought. Aristotle's thought overemphasized the transcendence of God and neglected His immanence in the creation- an essential part of the philosophical outlook of St. Augustine. Today we find that the presence or immanence of God in the world is almost completely overlooked against the background of the marvelous discoveries of the modern age. God is far away-"God is dead" as far as the thought of many contemporaries go. Do we not need to restore the sense of the presence of God in the face of the prevalent agnosticism and secularism of our day? One way to do this is to restore the consciousness of God's hand at work within the very recesses of nature itself. Teilhard's point of view certainly concenÂˇ trates on this objective. On the other hand, some modern philosophers (such as Bergson and Whitehead) adopt a similar viewpoint. Should the insights of these philosophers be lost, especially since the sense of God's immanence has been lost in the world at large? We need to remind the world of God's immanence to it not only in the ordinary sense of conservation and concurrence, but also in the special way that impressed men like Bergson and Teilhard. We are not of course suggesting a neglect of God's transcendence. But a genuine appreciation of His immanence will lead to a deeper realization of His transcendence. Teilhard looked upon the world with eyes full of wonder over the intrinsic power of nature to progress and develop.