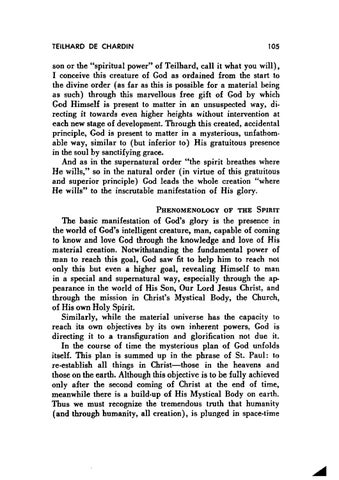 son or the "spiritual power" of Teilhard, call it what you will), I conceive this creature of God as ordained from the start to the divine order (as far as this is possible for a material being as such) through this marvellous free gift of God by which God Himself is present to matter in an unsuspected way, directing it towards even higher heights without intervention at each new stage of development. Through this created, accidental principle, God is present to matter in a mysterious, unfathomable way, similar to (but inferior to) His gratuitous presence in the soul by sanctifying grace. And as in the supernatural order "the spirit breathes where He wills," so in the natural order (in virtue of this gratuitous and superior principle) God leads the whole creation "where He wills" to the inscrutable manifestation of His glory. PHENOMENOLOGY OF THE SPIRIT

The basic manifestation of God's glory is the presence in the world of God's intelligent creature, man, capable of coming to know and love God through the knowledge and love of His material creation. Notwithstanding the fundamental power of man to reach this goal, God saw fit to help him to reach not only this but even a higher goal, revealing Himself to man in a special and supernatural way, especially through the appearance in the world of His Son, Our Lord Jesus Christ, and through the mission in Christ's Mystical Body, the Church, of His own Holy Spirit. Similarly, while the material universe has the capacity to reach its own objectives by its own inherent powers, God is directing it to a transfiguration and glorification not due it. In the course of time the mysterious plan of God unfolds itself. This plan is summed up in the phrase of St. Paul: to re-establish all things in Christ-those in the heavens and those on the earth. Although this objective is to be fully achieved only after the second coming of Christ at the end of time, meanwhile there is a build-up of His Mystical Body on earth. Thus we must recognize the tremendous truth that humanity (and through humanity, all creation), is plunged in space-time