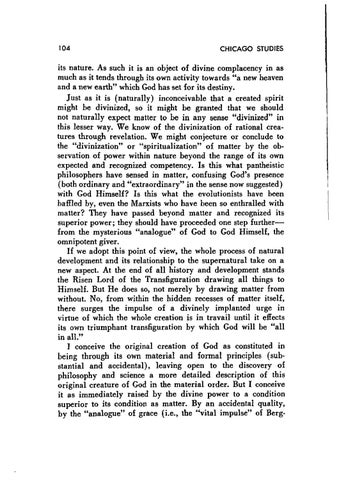 its nature. As such it is an object of divine complacency in as much as it tends through its own activity towards "a new heaven and a new earth" which God has set for its destiny. Just as it is (naturally) inconceivable that a created spirit might be divinized, so it might be granted that we should not naturally expect matter to be in any sense "divinized" in this lesser way. We know of the divinization of rational creatures through revelation. We might conjecture or conclude to the "divinization" or "spiritualization" of matter by the observation of power within nature beyond the range of its own expected and recognized competency. Is this what pantheistic philosophers have sensed in matter, confusing God's presence (both ordinary and "extraordinary" in the sense now suggested) with God Himself? Is this what the evolutionists have been baffled by, even the Marxists who have been so enthralled with matter? They have passed beyond matter and recognized its superior power; they should have proceeded one step furtherfrom the mysterious "analogue" of God to God Himself, the omnipotent giver. If we adopt this point of view, the whole process of natural development and its relationship to the supernatural take on a new aspect. At the end of all history and development stands the Risen Lord of the Transfiguration drawing all things to Himself. But He does so, not merely by drawing matter from without. No, from within the hidden recesses of matter itself, there surges the impulse of a divinely implanted urge in virtue of which the whole creation is in travail until it effects its own triumphant transfiguration by which God will he "all in all." I conceive the original creation of God as constituted in being through its own material and formal principles (subÂˇ stantial and accidental), leaving open to the discovery of philosophy and science a more detailed description of this original creature of God in the material order. But I conceive it as immediately raised by the divine power to a condition superior to its condition as matter. By an accidental quality, by the "analogue" of grace (i.e., the "vital impulse" of BergÂˇ