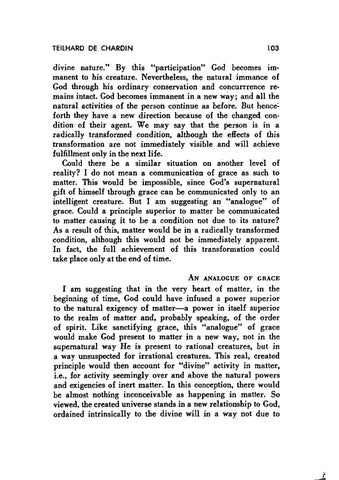 divine nature." By this "participation" God becomes immanent to his creature. Nevertheless, the natural immance of God through his ordinary conservation and concurrrence remains intact. God becomes immanent in a new way; and all the natural activities of the person continue as before. But hence: forth they have a new direction because of the changed condition of their agent. We may say that the person is in a radically transformed condition, although the e:ffects of this transformation are not immediately visible and will achieve fulfillment only in the next life. Could there be a similar situation on another level of reality? I do not mean a communication of grace as such to matter. This would be impossible, since God's supernatural gift of himself through grace can be communicated only to an intelligent creature. But I am suggesting an "analogue" of grace. Could a principle superior to matter be communicated to matter causing it to be a condition not due to its nature? As a result of this, matter would be in a radically transformed condition, although this would not be immediately apparent. In fact, the full achievement of this transformation could take place only at the end of time.

AN ANALOGUE OF GRACE I am suggesting that in the very heart of matter, in the beginning of time, God could have infused a power superior to the natural exigency of matter-a power in itself superior to the realm of matter and, probably speaking, of the order of spirit. Like sanctifying grace, this "analogue" of grace would make God present to matter in a new way, not in the supernatural way He is present to rational creatures, but in a way unsuspected for irrational creatures. This real, created principle would then account for "divine" activity in matter, i.e., for activity seemingly over and above the natural powers and exigencies of inert matter. In this conception, there would be almost nothing inconceivable as happening in matter. So viewed, the created universe stands in a new relationship to God, ordained intrinsically to the divine will in a way not due to