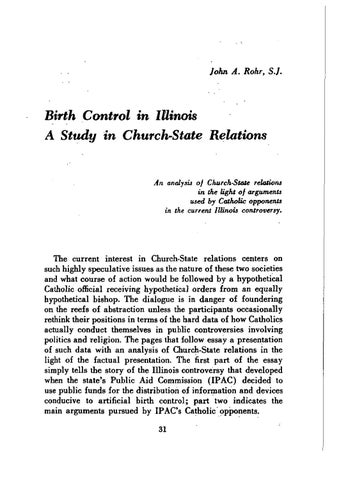 The current interest in Church-State relations centers on such highly speculative issues as the nature of these two societies and what course of action would be followed by a hypothetical Catholic official receiving hypothetical orders from an equally hypothetical bishop. The dialogue is in danger of foundering on the reefs of abstraction unless the participants occasionally rethink their positions in terms of the hard data of how Catholics actually conduct themselves in public controversies involving politics and religion. The pages that follow essay a presentation of such data with an analysis of Church-State relations in the light of the factual presentation. The first part of the essay simply tells the story of the Illinois controversy that developed when the state&#39;s Public Aid Commission (IPAC) decided to use public funds for the distribution of information and devices conducive to artificial birth control; part two indicates the main arguments pursued by IPAC&#39;s CatholicÂˇ opponents.