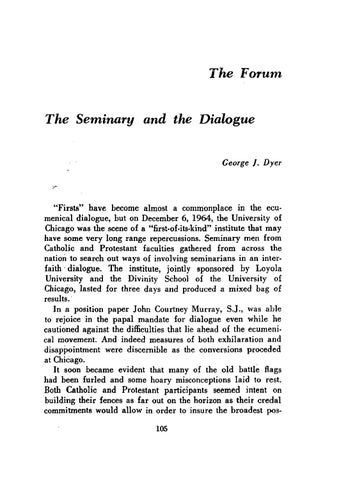 The Forum The Seminary and the Dialogue George /. Dyer

&quot;Firsts&quot; have become almost a commonplace in the ecumenical dialogue, but on December 6, 1964, the University of Chicago was the scene of a &quot;first-of-its-kind&quot; institute that may have some very long range repercussions. Seminary men from Catholic and Protestant faculties gathered from across the nation to search out ways of involving seminarians in an interfaith Âˇ dialogue. The institute, jointly sponsored by Loyola University and the Divinity School of the University of Chicago, lasted for three days and produced a mixed bag of results.Âˇ In a position paper John Courtney Murray, S.J., was able to rejoice in the papal mandate for dialogue even while he cautioned against the difficulties that lie ahead of the ecumenical movement. And indeed measures of both exhilaration and disapj:&gt;ointment were discernible as the conversions proceded at Chicago. It soon became evident that many of the old battle flags had been furled and some hoary misconceptions laid to rest. Both Catholic and Protestant participants seemed intent on building their fences as far out on the horizon as their credal commitments would allow in order to insure the broadest pos105