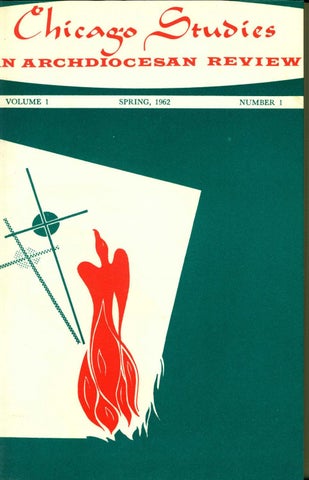 THE GosPELS IN THE LIGHT OF MoDERN REsEARcH MEDICAL ETHICS

THE PHENOMENON OF MAN

AND THE pARISH PRIEST THE THEOLOGY OF FUND·Il&lt;~SING THE WORLD COUNCIL OF CHURCHES

THE ART oF GIVING INsTRUCTIONS

PSYCHOLOGY OF THE DECAYING NEIGHBORHOOD

The Forum The Art of Giving Instructions lames /. Killgallon The term commonly used to describe the preparation which a convert undergoes before being received into the Church is instruction. The convert is said to be &quot;taking instructions.&quot; Actually, this crucial period in the life of the convert includes more than the mere imparting of information which would come under the heading of instructions. But it is still quite accurate to say that during this period the priest is giving instructions and the convert receiving them. It is the content of these instructions and the manner in which it is presented which principally concern us here. The teaching of Christian doctrine is acknowledged to be an art. Here, then, as in every art the modus agendi will be deterÂˇ mined by the end in view. In this case the end is to cooperate with the Holy Spirit in forming a mature, responsible, and active member of the mystical body of Christ. If the end were merely to turn out someone who &quot;knows the teachings of the Church,&quot; then a cold exposition of the articles of the creed, the sacraments, and the commandments would suffice. But the aim of our instructions is vastly more than this. We are not endeavoring to wind up with the kind of superficial Catholic whom we meet all too often - the kind who is orthodox in his belief in the sense that he accepts intellectually the doctrines which the Church teaches, but whose attitudes and manner of living are indistinguishable from those of people who have no faith at all. Nor are we content to produce the legalistic kind of Catholic, the kind who views the Church and the sacraments as a sort of gigantic supernatural vending machine. Nor do we want the immature type of Catholic, who expects the Church to do all his thinking for him and whose prayer life is centered on private devotions rather than on the Eucharist. Of course, 104

much will depend on the capabilities of the convert. Some will be very limited intellectually. Some will be unimaginative and lacking in enthusiasm. Nonetheless, a certain definite type of orientation must be given to all, within the limits of their caÂˇ pabilities, if the convert is to be the kind of Catholic which the Church needs here and now. Perhaps, the most important element in this orientation is the idea of community. At the very outset the convert should be made aware of the fact that he is preparing to be incorÂˇ porated into a body - the living body of Christ. Even though the convert may have been a truly religious person before seeking admission to the Church, the chances are that his reÂˇ ligious life up to now has been quite individualistic. He must be made to realize that becoming a Catholic means more than entering into a deeper personal union with God. He must be made to realize that it also means becoming deeply involved in the family of God, that it means a commitment to Christ as He is today - the mystical Christ, Christ living, suffering, and acting in the world, Christ struggling to re-fashion and transform the world. To this end the Church should be presented not merely as an institution founded by Christ and watched over by the Holy Spirit, but as the body of Christ, whose soul, the Holy Spirit, lives and acts within it and in its members. The convert&#39;s life should be explained as the living out of his vocation as a member of Christ&#39;s body. He should see the sacraments - not only baptism, confirmation, and marriage, but also Eucharist and penance- in their proper setting, with all their essential social implications. He should see his growth in sanctity not as a merely individual thing, but as his growth as a member of Christ&#39;s body. The convert should be shown, right from the start, that being a Catholic means being apostolic. He should be impressed with the fact that as a Catholic &quot;he is the Church,&quot; that he must take part in the Church&#39;s work of penetrating the world and of increasing in numbers. The convert must be taught that the first, greatest, and most essential thing the Church does is worship God. He must see the Eucharist as the very center of the Church. He must be made to realize that as a member of Christ&#39;s body his highest and greatest function is to

participate in the Mass with his fellow-members in Christ. While the convert must be taught the importance of private prayer and helped to form habits of prayer, his prayer life should be firmly rooted in the Mass and the sacraments, in the worship which the Church in its entirety offers to God through Christ, her head, and which the members offer to Christ. One of the problems with which all priests have to contend is legalism among our people. Mortal sin is too often thought of as simply the breaking of a law, a legal infraction which entails a legal penalty, but which can be rectified by confession and absolution. This is the attitude of the mother who tells her children on Friday, &quot;We have nothing in the house to eat except meat. Go ahead and eat it and go to confession tomorrow.&quot; This is the attitude, too, of the person who commits one fully deliberate mortal sin and who goes blithely about his business, not really troubled in conscience, for months, until Christmas or Easter or some other event occurs which he associates with confession. To prevent this sort of attitude in a convert it is necessary to give a full presentation of the divine life of sanctifying grace. The convert must be thoroughly impressed with the reality of grace and of its supreme importance. He must be shown that the Christian life is a life of loving union with God. He must see that mortal sin is nothing less than a rejection of God, of His life, and of His love. The convert must be protected from another false attitude, too - that which regards Christian morality as a joyless observance of a body of arbitrary laws. He must be shown that the Christian life is a life of love. He must see the commandments not as merely laws which restrict his freedom, but as the minimum requirements of love of God and of one&#39;s neighbor. He must, by all means, see that the Christian life entails much more than merely &quot;keeping the commandments,&quot; &quot;keeping out of sin,&quot; but that it is a positive and ever-deepening practice of love. What is called for, then, is a living, joyful, positive presentation of the faith rather than an academic exposition of formulas. And the source from which this presentation will come is Scripture. The truths of the faith can appear cold and lifeless

if they are presented in theological terms. They come marvelous! y to life when they are presented as the Gospels give them to us, from the lips of our Lord. It is one thing to enumerate the seven corporal works of mercy; it is quite another to read Christ&#39;s words, &quot;I was hungry and you gave me to eat ... As long as you did it for one of these, the least of my brethren, you did it for me.&quot; It is one thing to discuss the processions in the Trinity; it is another to read the words of Jesus about the Father and the Holy Spirit. It is one thing to see the Church as the family of God in the. world today; it is another to see how the people of God developed from a man, from a group of tribes, from a people, from a kingdom, into the great and wonderful fulfillment - the living union of all God&#39;s people with Him and with one another in Jesus Christ. If the convert is to be imbued with the spirit of Catholicism it is essential that he be grounded and centered in the Scriptures. Such a scriptural presentation will require something from the instructor. It will require that he himself &quot;search the Scriptures&quot; in preparing his instructions. It will require that he break out of the mold of creed, sacraments, and commandments - presented in an academic way - and present the truths which are contained in the creed, the reality of the sacraments, and the full meaning of Christian living in a fresh and living way. It will mean taking Scripture as the very vehicle by which the truths of the faith are presented, instead of using it merely in the form of a short quotation which clinches the point. For example, in this method of presentation one might teach the truth of the universality of the Church by taking the parables of our Lord which bring out this truth - the Mustard Seed, the Marriage Feast. Then one would present the words of Christ to the apostles, &quot;Go into the whole world and preach the gospel to every creature . . . &quot; Finally, one would show from the Acts of the Apostles how the apostles began to preach to the gentiles {Cornelius, Paul&#39;s missionary journeys). A set of instructions for convert classes which uses this approach and is based on the Gospel of St. Mark is being used experimentally in several Chicago parishes at the present time. It is of paramount importance that what is presented in the instructions given to the convert be integrated into his prayer

life. Since the prayer life of the convert is to be, first of all, a participation in the prayer life of the Church, it is essential that he see the doctrines he is learning as they appear in the liturgy. He must begin to join with the faithful in the worship of the Church right at the outset. He must be made to see that the highest and most important expression of what he believes is worship, both the worship of the Church and his private prayer. Finally, there must be a tie-up between what the convert is learning in his instructions and his daily life. There must be a reduction to practice of the truths he accepts. There must be a response from the will to what the intellect receives. In this important matter the instructor will have to act as a prudent guide, suggesting, checking, encouraging, sensing when he should require more, when he should not press too hard. In most cases the priest who instructs a convert is a very strong influence in the life of the convert. The priest is contributing vitally to the formation of a member of Christ&#39;s body. That formation, to a great degree, is in his hands. The instructor who realizes this fact will never be content merely with &quot;covering the matter&quot; or &quot;getting through the catechism.&quot; Rather, he will be aware that when he is &quot;giving instructions&quot; he is doing what Pius XI described as the work of all who teach Christian doctrine helping to form Christ in one whom Christ has redeemed by His blood.

The Forum The Forum presents brief observations and comments (approximately 1000 words) based primarily on personal experience in the apostolate. Address all manuscripts to the Editors of CHICAGO STUDIES, Box 665, Mundelein, IlL