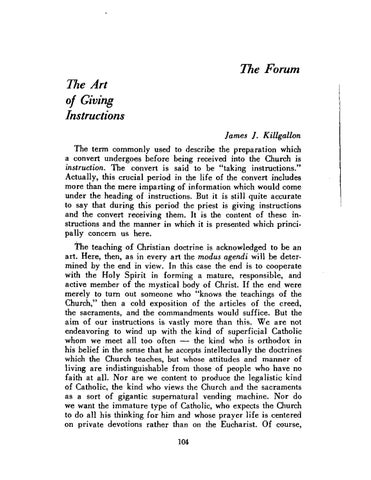 The Forum The Art of Giving Instructions lames /. Killgallon The term commonly used to describe the preparation which a convert undergoes before being received into the Church is instruction. The convert is said to be "taking instructions." Actually, this crucial period in the life of the convert includes more than the mere imparting of information which would come under the heading of instructions. But it is still quite accurate to say that during this period the priest is giving instructions and the convert receiving them. It is the content of these instructions and the manner in which it is presented which principally concern us here. The teaching of Christian doctrine is acknowledged to be an art. Here, then, as in every art the modus agendi will be deterÂˇ mined by the end in view. In this case the end is to cooperate with the Holy Spirit in forming a mature, responsible, and active member of the mystical body of Christ. If the end were merely to turn out someone who "knows the teachings of the Church," then a cold exposition of the articles of the creed, the sacraments, and the commandments would suffice. But the aim of our instructions is vastly more than this. We are not endeavoring to wind up with the kind of superficial Catholic whom we meet all too often - the kind who is orthodox in his belief in the sense that he accepts intellectually the doctrines which the Church teaches, but whose attitudes and manner of living are indistinguishable from those of people who have no faith at all. Nor are we content to produce the legalistic kind of Catholic, the kind who views the Church and the sacraments as a sort of gigantic supernatural vending machine. Nor do we want the immature type of Catholic, who expects the Church to do all his thinking for him and whose prayer life is centered on private devotions rather than on the Eucharist. Of course, 104