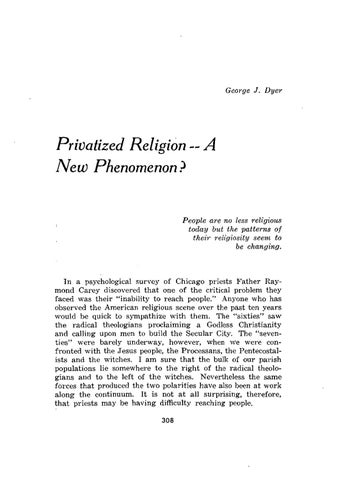 People are no less reUgious today but the patterns of tlwi?Âˇ religiosity seern to be changing.

In a psychological survey of Chicago priests Father Raymond Carey discovered that one of the critical problem they faced was their &quot;inability to reach people.&quot; Anyone who has observed the American religious scene over the past ten years would be quick to sympathize with them. The &quot;sixties&quot; saw the radical theologians proclaiming a Godless Christianity and calling upon men to build the Secular City. The &quot;seventies&quot; were barely underway, however, when \Ve were confronted with the Jesus people, the Processans, the Pentecostalists and the witches. I am sure that the bulk of our parish populations lie somewhere to the right of the radical theologians and to the left of the witches. Nevertheless the same forces that produced the two polarities have also been at work along the continuum. It is not at all surprising, therefore, that priests may be having difficulty reaching people. 308