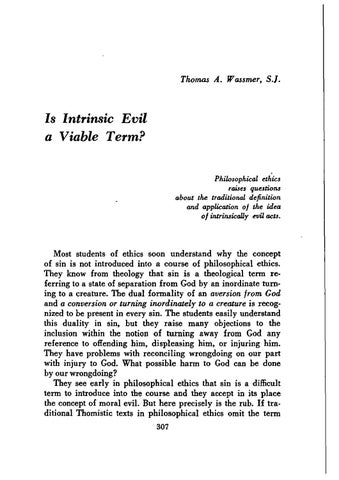 about the traditional definition and application of the idea of intrinsically evil acts.

Most students of ethics soon understand why the concept of sin is not introduced into a course of philosophical ethics. They know from theology that sin is a theological term re· £erring to a state of separation from God by an inordinate tum· ing to a creature. The dual formality of an aversion from God and a conversion or turning inordinately to a creature is recognized to be present in every sin. The students easily understand this duality in sin, but they raise many objections to the inclusion within the notion of turning away from God any reference to offending him, displeasing him, or injuring him. They have problems with reconciling wrongdoing on our part with injury to God. What possible harm to God can be done by our wrongdoing? They see early in philosophical ethics that sin is a difficult term to introduce into the course and they accept in its place the concept of moral evil. But here precisely is the rub. If tra· ditional Thomistic texts in philosophical ethics omit the term 307