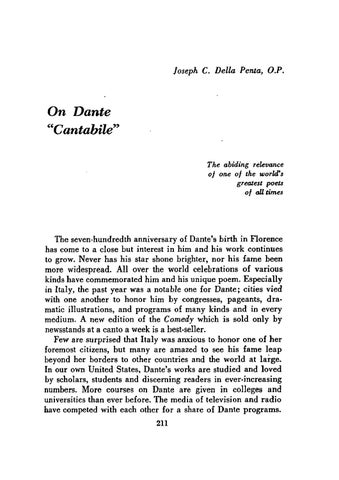 The seven-hundredth anniversary of Dante&#39;s birth in florence has come to a close but interest in him and his work continues to grow. Never has his star shone brighter, nor his fame been more widespread. All over the world celebrations of various kinds have commemorated him and his unique poem. Especially in Italy, the past year was a notable one for Dante; cities vied with one another to honor him by congresses, pageants, dramatic illustrations, and programs of many kinds and in every medium. A new edition of the Comedy which is sold only by newsstands at a canto a week is a best-seller. Few are surprised that Italy was anxious to honor one of her foremost citizens, but many are amazed to see his fame leap beyond her borders to other countries and the world at large. In our own United States, Dante&#39;s works are studied and loved by scholars, students and discerning readers in ever-increasing numbers. More courses on Dante are given in colleges and universities than ever before. The media of television and radio have competed with each other for a share of Dante programs. 211