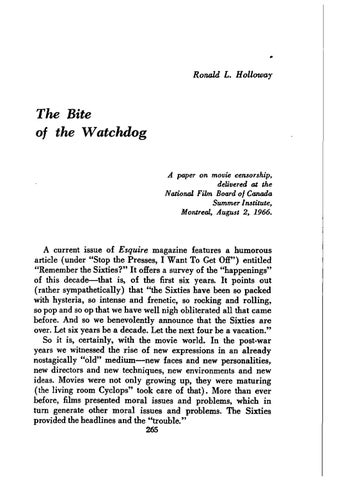 The Bite of the Watchdog A paper on movie censorship, delivered at the National Film Board of Camuia Summer Institute,

A current issue of Esquire magazine features a humorous article (under &quot;Stop the Presses, I Want To Get Off&quot;) entitled &quot;Remember the Sixties?&quot; It offers a survey of the &quot;happenings&quot; of this decade-that is, of the first six years. It points out (rather sympathetically) that &quot;the Sixties have been so packed with hysteria, so intense and frenetic, so rocking and rolling, so pop and so op that we have well nigh obliterated all that came before. And so we benevolently announce that the Sixties are over. Let six years be a decade. Let the next four be a vacation.&quot; So it is, certainly, with the movie world. In the post-war years we witnessed the rise of new expressions in an already nostagically &quot;old&quot; medium-new faces and new personalities, new directors and new techniques, new environments and new ideas. Movies were not only growing up, they were maturing (the living room Cyclops&quot; took care of that). More than ever before, films presented moral issues and problems, which in tum generate other moral issues and problems. The Sixties provided the headlines and the &quot;trouble.&quot; 265