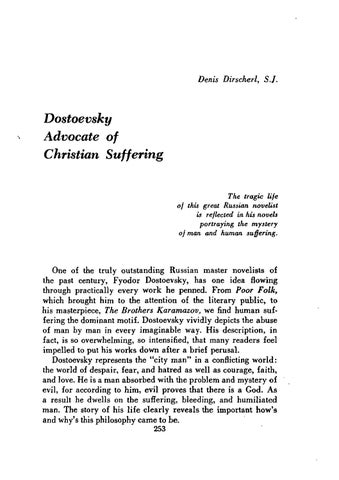 Dostoevsky Advocate of Christian Suffering The tragic life of thi. great Russian noveli.t is reflected in his novels portraying the mystery of man and human suOering.

One of the truly outstanding Russian master novelists of the past century, Fyodor Dostoevsky, has one idea flowing through practically every work he penned. From Poor Folk, which brought him to the attention of the literary public, to his masterpiece, The Brothers Karamazov, we find human suffering the dominant motif. Dostoevsky vividly depicts the abuse of man by man in every imaginable way. His description, in fact, is so overwhelming, so intensified, that many readers feel impelled to put his works down after a brief perusal. Dostoevsky represents the &quot;city man&quot; in a conflicting world: the world of despair, fear, and hatred as well as courage, faith, and love. He is a man absorbed with the problem and mystery of evil, for according to him, evil proves that there is a God. As a result he dwells on the suffering, bleeding, and humiliated man. The story of his life clearly reveals the important how&#39;s and why&#39;s this philosophy came to be. 253