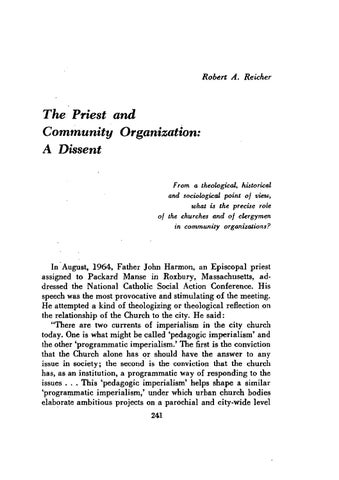 The Priest and Community Organization: A Dissent From a theowgical, hi.torical and sociowgical point of view, what is the precise role of the churches and of clergymen in community organizaJicns?

In .August, 1964, Father John Harmon, an Episcopal priest assigned to Packard Manse in Roxbury, Massachusetts, adÂˇ dressed the National Catholic Social Action Conference. His speech was the most provocative and stimulating of the meeting. He attempted a kind of theologizing or theological reflection on the relationship of the Church to the city. He said: &quot;There are two currents of imperialism in the city church today. One is what might be called &#39;pedagogic imperialism&#39; and the other &#39;programmatic imperialism.&#39; The first is the conviction that the Church alone has or should have the answer to any issue in society; the second is the conviction that the church has, as an institution, a programmatic way of responding to the issues ... This &#39;pedagogic imperialism&#39; helps shape a similar &#39;programmatic imperialism,&#39; under which urban church bodies elaborate ambitious projects on a parochial and city-wide level