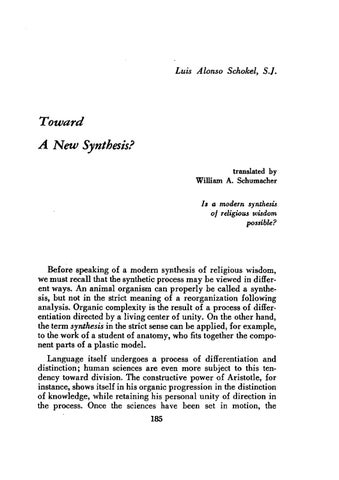 A New Synthesis? translated by William A. Schumacher

Before speaking of a modem synthesis of religious wisdom, we must recall that the synthetic process may be viewed in differ· ent ways. An animal organism can properly be called a synthe· sis, but not in the strict meaning of a reorganization following analysis. Organic complexity is the result of a process of differ· entiation directed by a living center of unity. On the other hand, the term synthesis in the strict sense can be applied, for example, to the work of a student of anatomy, who fits together the compo· nent parts of a plastic model. Language itself undergoes a process of differentiation and distinction; human sciences are even more subject to this ten· dency toward division. The constructive power of Aristotle, for instance, shows itself in his organic progression in the distinction of knowledge, while retaining his personal unity of direction in the process. Once the sciences have been set in motion, the