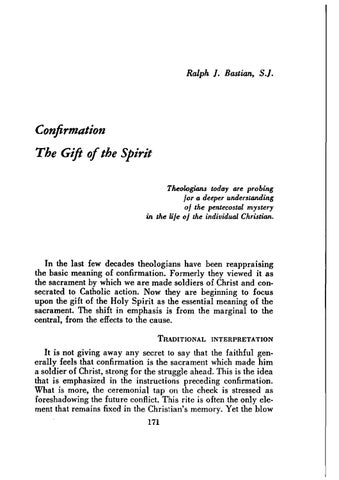 Confirmation The Gift of the Spirit Theologiatu today are probing for a deeper understanding of the pentecostal mystery in the life of the individual Christian.

In the last few decades theologians have been reappraising the basic meaning of confirmation. Formerly they viewed it as the sacrament by which we are made soldiers of Christ and consecrated to Catholic action. Now they are beginning to focus upon the gift of the Holy Spirit as the essential meaning of the sacrament. The shift in emphasis is from the marginal to the central, from the effects to the cause. TRADITIONAL INTERPRETATION

It is not giving away any secret to say that the faithful generally feels that confirmation is the sacrament which made him a soldier of Christ, strong for the struggle ahead. This is the idea that is emphasized in the instructions preceding confirmation. What is more, the ceremonial tap on the cheek is stressed as foreshadowing the future conflict. This rite is often the only element that remains fixed in the Christian&#39;s memory. Yet the blow 171