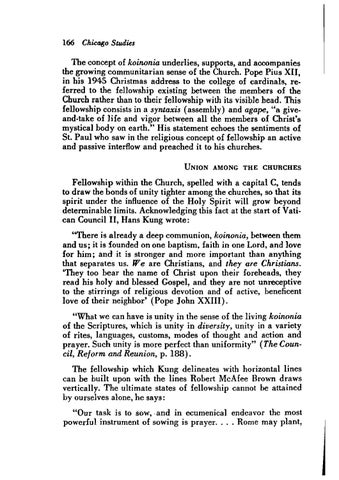 The concept of koirwnia underlies, supports, and accompanies the growing communitarian sense of the Church. Pope Pius XII, in his 1945 Christmas address to the college of cardinals, referred to the fellowship existing between the members of the Church rather than to their fellowship with its visible head. This fellowship consists in a syntaxis (assembly) and agape, &quot;a giveand-take of life and vigor between all the members of Christ&#39;s mystical body on earth.&quot; His statement echoes the sentiments of St. Paul who saw in the religious concept of fellowship an active and passive interflow and preached it to his churches. UNION AMONG THE CHURCHES

Fellowship within the Church, spelled with a capital C, tends to draw the bonds of unity tighter among the churches, so that its spirit under the influence of the Holy Spirit will grow beyond determinable limits. Acknowledging this fact at the start of Vatican Council II, Hans Kung wrote: &quot;There is already a deep communion, koinonia, between them and us; it is founded on one baptism, faith in one Lord, and love for him; and it is stronger and more important than anything that separates us. We are Christians, and they are Christians. &#39;They too bear the name of Christ upon their foreheads, they read his holy and blessed Gospel, and they are not unreceptive to the stirrings of religious devotion and of active, beneficent love of their neighbor&#39; (Pope John XXIII). &quot;What we can have is unity in the sense of the living koinonia of the Scriptures, which is unity in diversity, unity in a variety of rites, languages, customs, modes of thought and action and prayer. Such unity is more perfect than uniformity&quot; (The Council, Reform and Reunion, p. 188). The fellowship which Kung delineates with horizontal lines can be built upon with the lines Robert McAfee Brown draws vertically. The ultimate states of fellowship cannot be attained by ourselves alone, he says: &quot;Our task is to sow, .and in ecumenical endeavor the most powerful instrument of sowing is prayer.... Rome may plant,