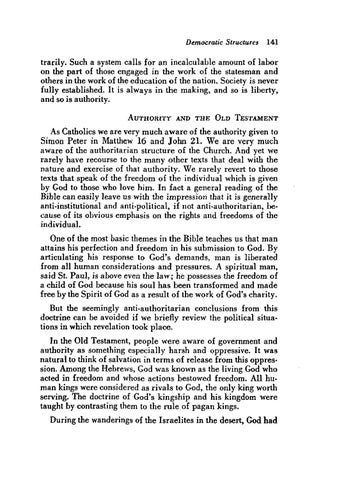 trarily. Such a system calls for an incalculable amount of labor on the part of those engaged in the work of the statesman and others in the work of the education of the nation. Society is never fully established. It is always in the making, and so is liberty, and so is authority. AUTHORITY AND THE OLD TESTAMENT

As Catholics we are very much aware of the authority given to Simon Peter in Matthew 16 and John 21. We are very much aware of the authoritarian structure of the Church. And yet we rarely have recourse to the many other texts that deal with the nature and exercise of that authority. We rarely revert to those texts that speak of the freedom of the individual which is given by God to those who love him. In fact a general reading of the Bible can easily leave us with the impression that it is generally anti-institutional and anti-political, if not anti-authoritarian, because of its obvious emphasis on the rights and freedoms of the individual. One of the most basic themes in the Bible teaches us that man attains his perfection and freedom in his submission to God. By articulating his response to God&#39;s demands, man is liberated from all human considerations and pressures. A spiritual man, said St. Paul, is above even the law; he possesses the freedom of a child of God because his soul has been transformed and made free by the Spirit of God as a result of the work of God&#39;s charity. But the seemingly anti-authoritarian conclusions from this doctrine can be avoided if we briefly review the political situaÂˇ tions in which revelation took place. In the Old Testament, people were aware of government and authority as something especially harsh and oppressive. It was natural to think of salvation in terms of release from this oppresÂˇ sion. Among the Hebrews, God was known as the living God who acted in freedom and whose actions bestowed freedom. All human kings were considered as rivals to God, the only king worth serving. The doctrine of God&#39;s kingship and his kingdom were taught by contrasting them to the rule of pagan kings. During the wanderings of the Israelites in the desert, God had