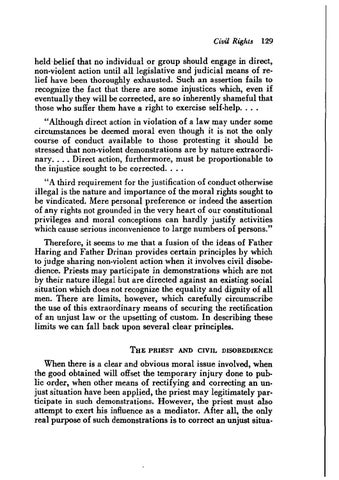 held belief that no individual or group should engage in direct, non-violent action until all legislative and judicial means of relief have been thoroughly exhausted. Such an assertion fails to recognize the fact that there are some injustices which, even if eventually they will be corrected, are so inherently shameful that those who suffer them have a right to exercise self-help.... &quot;Although direct action in violation of a law may under some circumstances be deemed moral even though it is not the only course of conduct available to those protesting it should be stressed that non-violent demonstrations are by nature extraordinary.... Direct action, furthermore, must be proportionable to the injustice sought to be corrected.... &quot;A third requirement for the justification of conduct otherwise illegal is the nature and importance of the moral rights sought to be vindicated. Mere personal preference or indeed the assertion of any rights not grounded in the very heart of our constitutional privileges and moral conceptions can hardly justify activities which cause serious inconvenience to large numbers of persons.&quot; Therefore, it seems to me that a fusion of the ideas of Father Haring and Father Drinan provides certain principles by which to judge sharing non-violent action when it involves civil disobedience. Priests may participate in demonstrations which are not by their nature illegal but are directed against an existing social situation which does not recognize the equality and dignity of all men. There are limits, however, which carefully circumscribe the use of this extraordinary means of securing the rectification of an unjust law or the upsetting of custom. In describing these limits we can fall back upon several clear principles. THE PRIEST AND CIVIL DISOBEDIENCE

When there is a clear and obvious moral issue involved, when the good obtained will offset the temporary injury done to public order, when other means of rectifying and correcting an unjust situation have been applied, the priest may legitimately participate in such demonstrations. However, the priest must also attempt to exert his influence as a mediator. After all, the only real purpose of such demonstrations is to correct an unjust situa-