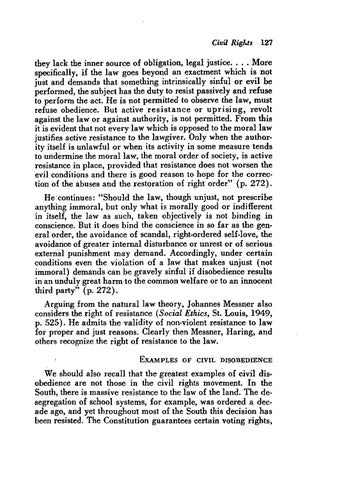 they lack the inner source of obligation, legal justice.... More specifically, if the law goes beyond an exactment which is not just and demands that something intrinsically sinful or evil he performed, the subject has the duty to resist passively and refuse to perform the act. He is not permitted to observe the law, must refuse obedience. But active resistance or uprising, revolt against the law or against authority, is not permitted. From this it is evident that not every law which is opposed to the moral law justifies active resistance to the lawgiver. Only when the author· ity itself is unlawful or when its activity in some measure tends to undermine the moral law, the moral order of society, is active resistance in place, provided that resistance does not worsen the evil conditions and there is good reason to hope for the correc· tion of the abuses and the restoration of right order&quot; (p. 272). He·continues: &quot;Should the law, though unjust, not prescribe anything immoral, but only what is morally good or indifferent in itself, the law as such, taken objectively is not binding in conscience. But it does bind the conscience in so far as the gen· eral order, the avoidance of scandal, right-ordered self-love, the avoidance of greater internal disturbance or unrest or of serious external punishment may demand. Accordingly, under certain conditions even the violation of a law that makes unjust (not immoral) .demands can be gravely sinful if disobedience results in an unduly great harm to the common welfare or to an innocent third party&quot; (p. 272). Arguing from the natural law theory, Johannes Messner also considers the right of resistance (Social Ethics, St. Louis, 1949, p. 525). He admits the validity of non-violent resistance to law for proper and just reasons. Clearly then Messner, Haring, and others recognize the right of resistance to the law. EXAMPLES OF CIVIL DISOBEDIENCE

We should also recall that the greatest examples of civil disobedience are not those in the civil rights movement. In the South, there is massive resistance to the law of the land. The desegregation of school systems, for example, was ordered a .decade ago, and yet throughout most of the South this decision has been resisted. The Constitution guarantees certain voting rights,