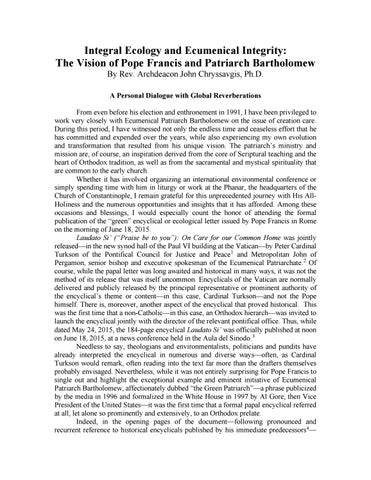 Integral Ecology and Ecumenical Integrity: The Vision of Pope Francis and Patriarch Bartholomew By Rev. Archdeacon John Chryssavgis, Ph.D. A Personal Dialogue with Global Reverberations From even before his election and enthronement in 1991, I have been privileged to work very closely with Ecumenical Patriarch Bartholomew on the issue of creation care. During this period, I have witnessed not only the endless time and ceaseless effort that he has committed and expended over the years, while also experiencing my own evolution and transformation that resulted from his unique vision. The patriarch’s ministry and mission are, of course, an inspiration derived from the core of Scriptural teaching and the heart of Orthodox tradition, as well as from the sacramental and mystical spirituality that are common to the early church. Whether it has involved organizing an international environmental conference or simply spending time with him in liturgy or work at the Phanar, the headquarters of the Church of Constantinople, I remain grateful for this unprecedented journey with His AllHoliness and the numerous opportunities and insights that it has afforded. Among these occasions and blessings, I would especially count the honor of attending the formal publication of the “green” encyclical or ecological letter issued by Pope Francis in Rome on the morning of June 18, 2015. Laudato Si’ (“Praise be to you”): On Care for our Common Home was jointly released—in the new synod hall of the Paul VI building at the Vatican—by Peter Cardinal Turkson of the Pontifical Council for Justice and Peace 1 and Metropolitan John of Pergamon, senior bishop and executive spokesman of the Ecumenical Patriarchate. 2 Of course, while the papal letter was long awaited and historical in many ways, it was not the method of its release that was itself uncommon. Encyclicals of the Vatican are normally delivered and publicly released by the principal representative or prominent authority of the encyclical’s theme or content—in this case, Cardinal Turkson—and not the Pope himself. There is, moreover, another aspect of the encyclical that proved historical. This was the first time that a non-Catholic—in this case, an Orthodox hierarch—was invited to launch the encyclical jointly with the director of the relevant pontifical office. Thus, while dated May 24, 2015, the 184-page encyclical Laudato Si’ was officially published at noon on June 18, 2015, at a news conference held in the Aula del Sinodo. 3 Needless to say, theologians and environmentalists, politicians and pundits have already interpreted the encyclical in numerous and diverse ways—often, as Cardinal Turkson would remark, often reading into the text far more than the drafters themselves probably envisaged. Nevertheless, while it was not entirely surprising for Pope Francis to single out and highlight the exceptional example and eminent initiative of Ecumenical Patriarch Bartholomew, affectionately dubbed “the Green Patriarch”—a phrase publicized by the media in 1996 and formalized in the White House in 1997 by Al Gore, then Vice President of the United States—it was the first time that a formal papal encyclical referred at all, let alone so prominently and extensively, to an Orthodox prelate. Indeed, in the opening pages of the document—following pronounced and recurrent reference to historical encyclicals published by his immediate predecessors 4—