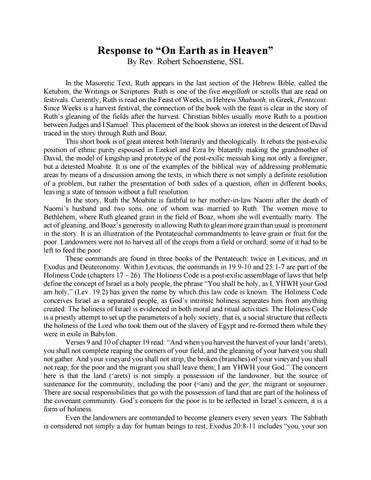 Response to “On Earth as in Heaven” By Rev. Robert Schoenstene, SSL In the Masoretic Text, Ruth appears in the last section of the Hebrew Bible, called the Ketubim, the Writings or Scriptures. Ruth is one of the five megilloth or scrolls that are read on festivals. Currently, Ruth is read on the Feast of Weeks, in Hebrew Shabuoth, in Greek, Pentecost. Since Weeks is a harvest festival, the connection of the book with the feast is clear in the story of Ruth’s gleaning of the fields after the harvest. Christian bibles usually move Ruth to a position between Judges and I Samuel. This placement of the book shows an interest in the descent of David traced in the story through Ruth and Boaz. This short book is of great interest both literarily and theologically. It rebuts the post-exilic position of ethnic purity espoused in Ezekiel and Ezra by blatantly making the grandmother of David, the model of kingship and prototype of the post-exilic messiah king not only a foreigner, but a detested Moabite. It is one of the examples of the biblical way of addressing problematic areas by means of a discussion among the texts, in which there is not simply a definite resolution of a problem, but rather the presentation of both sides of a question, often in different books, leaving a state of tension without a full resolution. In the story, Ruth the Moabite is faithful to her mother-in-law Naomi after the death of Naomi’s husband and two sons, one of whom was married to Ruth. The women move to Bethlehem, where Ruth gleaned grain in the field of Boaz, whom she will eventually marry. The act of gleaning, and Boaz’s generosity in allowing Ruth to glean more grain than usual is prominent in the story. It is an illustration of the Pentateuchal commandments to leave grain or fruit for the poor. Landowners were not to harvest all of the crops from a field or orchard; some of it had to be left to feed the poor. These commands are found in three books of the Pentateuch: twice in Leviticus, and in Exodus and Deuteronomy. Within Leviticus, the commands in 19:9-10 and 25:1-7 are part of the Holiness Code (chapters 17 – 26). The Holiness Code is a post-exilic assemblage of laws that help define the concept of Israel as a holy people, the phrase “You shall be holy, as I, YHWH your God am holy,” (Lev. 19:2) has given the name by which this law code is known. The Holiness Code conceives Israel as a separated people, as God’s intrinsic holiness separates him from anything created. The holiness of Israel is evidenced in both moral and ritual activities. The Holiness Code is a priestly attempt to set up the parameters of a holy society, that is, a social structure that reflects the holiness of the Lord who took them out of the slavery of Egypt and re-formed them while they were in exile in Babylon. Verses 9 and 10 of chapter 19 read: “And when you harvest the harvest of your land (‘arets), you shall not complete reaping the corners of your field, and the gleaning of your harvest you shall not gather. And your vineyard you shall not strip, the broken (branches) of your vineyard you shall not reap; for the poor and the migrant you shall leave them; I am YHWH your God.” The concern here is that the land (‘arets) is not simply a possession of the landowner, but the source of sustenance for the community, including the poor (&lt;ani) and the ger, the migrant or sojourner. There are social responsibilities that go with the possession of land that are part of the holiness of the covenant community. God’s concern for the poor is to be reflected in Israel’s concern, it is a form of holiness. Even the landowners are commanded to become gleaners every seven years. The Sabbath is considered not simply a day for human beings to rest, Exodus 20:8-11 includes “you, your son