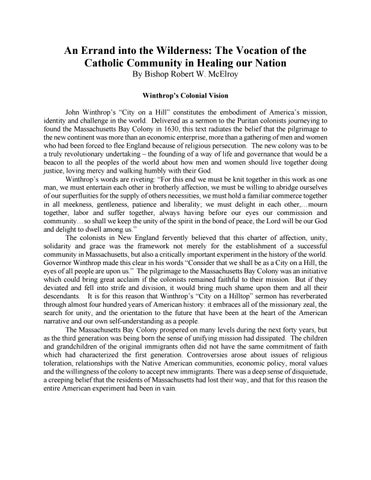 An Errand into the Wilderness: The Vocation of the Catholic Community in Healing our Nation By Bishop Robert W. McElroy Winthrop’s Colonial Vision John Winthrop’s “City on a Hill” constitutes the embodiment of America’s mission, identity and challenge in the world. Delivered as a sermon to the Puritan colonists journeying to found the Massachusetts Bay Colony in 1630, this text radiates the belief that the pilgrimage to the new continent was more than an economic enterprise, more than a gathering of men and women who had been forced to flee England because of religious persecution. The new colony was to be a truly revolutionary undertaking – the founding of a way of life and governance that would be a beacon to all the peoples of the world about how men and women should live together doing justice, loving mercy and walking humbly with their God. Winthrop’s words are riveting: “For this end we must be knit together in this work as one man, we must entertain each other in brotherly affection, we must be willing to abridge ourselves of our superfluities for the supply of others necessities, we must hold a familiar commerce together in all meekness, gentleness, patience and liberality; we must delight in each other,…mourn together, labor and suffer together, always having before our eyes our commission and community…so shall we keep the unity of the spirit in the bond of peace, the Lord will be our God and delight to dwell among us.” The colonists in New England fervently believed that this charter of affection, unity, solidarity and grace was the framework not merely for the establishment of a successful community in Massachusetts, but also a critically important experiment in the history of the world. Governor Winthrop made this clear in his words “Consider that we shall be as a City on a Hill, the eyes of all people are upon us.” The pilgrimage to the Massachusetts Bay Colony was an initiative which could bring great acclaim if the colonists remained faithful to their mission. But if they deviated and fell into strife and division, it would bring much shame upon them and all their descendants. It is for this reason that Winthrop’s “City on a Hilltop” sermon has reverberated through almost four hundred years of American history: it embraces all of the missionary zeal, the search for unity, and the orientation to the future that have been at the heart of the American narrative and our own self-understanding as a people. The Massachusetts Bay Colony prospered on many levels during the next forty years, but as the third generation was being born the sense of unifying mission had dissipated. The children and grandchildren of the original immigrants often did not have the same commitment of faith which had characterized the first generation. Controversies arose about issues of religious toleration, relationships with the Native American communities, economic policy, moral values and the willingness of the colony to accept new immigrants. There was a deep sense of disquietude, a creeping belief that the residents of Massachusetts had lost their way, and that for this reason the entire American experiment had been in vain.