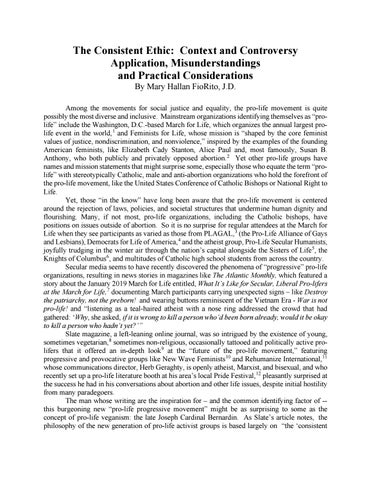 The Consistent Ethic: Context and Controversy Application, Misunderstandings and Practical Considerations By Mary Hallan FioRito, J.D. Among the movements for social justice and equality, the pro-life movement is quite possibly the most diverse and inclusive. Mainstream organizations identifying themselves as “prolife” include the Washington, D.C.-based March for Life, which organizes the annual largest prolife event in the world, 1 and Feminists for Life, whose mission is “shaped by the core feminist values of justice, nondiscrimination, and nonviolence,” inspired by the examples of the founding American feminists, like Elizabeth Cady Stanton, Alice Paul and, most famously, Susan B. Anthony, who both publicly and privately opposed abortion. 2 Yet other pro-life groups have names and mission statements that might surprise some, especially those who equate the term “prolife” with stereotypically Catholic, male and anti-abortion organizations who hold the forefront of the pro-life movement, like the United States Conference of Catholic Bishops or National Right to Life. Yet, those “in the know” have long been aware that the pro-life movement is centered around the rejection of laws, policies, and societal structures that undermine human dignity and flourishing. Many, if not most, pro-life organizations, including the Catholic bishops, have positions on issues outside of abortion. So it is no surprise for regular attendees at the March for Life when they see participants as varied as those from PLAGAL, 3 (the Pro-Life Alliance of Gays and Lesbians), Democrats for Life of America, 4 and the atheist group, Pro-Life Secular Humanists, joyfully trudging in the winter air through the nation’s capital alongside the Sisters of Life 5, the Knights of Columbus 6, and multitudes of Catholic high school students from across the country. Secular media seems to have recently discovered the phenomena of “progressive” pro-life organizations, resulting in news stories in magazines like The Atlantic Monthly, which featured a story about the January 2019 March for Life entitled, What It’s Like for Secular, Liberal Pro-lifers at the March for Life, 7 documenting March participants carrying unexpected signs – like Destroy the patriarchy, not the preborn! and wearing buttons reminiscent of the Vietnam Era - War is not pro-life! and “listening as a teal-haired atheist with a nose ring addressed the crowd that had gathered: ‘Why, she asked, if it is wrong to kill a person who’d been born already, would it be okay to kill a person who hadn’t yet?’” Slate magazine, a left-leaning online journal, was so intrigued by the existence of young, sometimes vegetarian, 8 sometimes non-religious, occasionally tattooed and politically active prolifers that it offered an in-depth look9 at the “future of the pro-life movement,” featuring progressive and provocative groups like New Wave Feminists 10 and Rehumanize International, 11 whose communications director, Herb Geraghty, is openly atheist, Marxist, and bisexual, and who recently set up a pro-life literature booth at his area’s local Pride Festival, 12 pleasantly surprised at the success he had in his conversations about abortion and other life issues, despite initial hostility from many paradegoers. The man whose writing are the inspiration for – and the common identifying factor of -this burgeoning new “pro-life progressive movement” might be as surprising to some as the concept of pro-life veganism: the late Joseph Cardinal Bernardin. As Slate’s article notes, the philosophy of the new generation of pro-life activist groups is based largely on “the ‘consistent