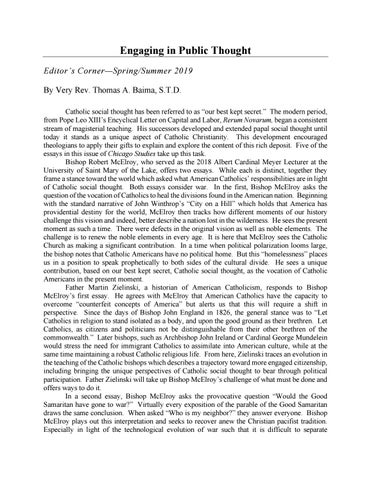 Engaging in Public Thought Editor’s Corner—Spring/Summer 2019 By Very Rev. Thomas A. Baima, S.T.D. Catholic social thought has been referred to as “our best kept secret.” The modern period, from Pope Leo XIII’s Encyclical Letter on Capital and Labor, Rerum Novarum, began a consistent stream of magisterial teaching. His successors developed and extended papal social thought until today it stands as a unique aspect of Catholic Christianity. This development encouraged theologians to apply their gifts to explain and explore the content of this rich deposit. Five of the essays in this issue of Chicago Studies take up this task. Bishop Robert McElroy, who served as the 2018 Albert Cardinal Meyer Lecturer at the University of Saint Mary of the Lake, offers two essays. While each is distinct, together they frame a stance toward the world which asked what American Catholics’ responsibilities are in light of Catholic social thought. Both essays consider war. In the first, Bishop McElroy asks the question of the vocation of Catholics to heal the divisions found in the American nation. Beginning with the standard narrative of John Winthrop’s “City on a Hill” which holds that America has providential destiny for the world, McElroy then tracks how different moments of our history challenge this vision and indeed, better describe a nation lost in the wilderness. He sees the present moment as such a time. There were defects in the original vision as well as noble elements. The challenge is to renew the noble elements in every age. It is here that McElroy sees the Catholic Church as making a significant contribution. In a time when political polarization looms large, the bishop notes that Catholic Americans have no political home. But this “homelessness” places us in a position to speak prophetically to both sides of the cultural divide. He sees a unique contribution, based on our best kept secret, Catholic social thought, as the vocation of Catholic Americans in the present moment. Father Martin Zielinski, a historian of American Catholicism, responds to Bishop McElroy’s first essay. He agrees with McElroy that American Catholics have the capacity to overcome “counterfeit concepts of America” but alerts us that this will require a shift in perspective. Since the days of Bishop John England in 1826, the general stance was to “Let Catholics in religion to stand isolated as a body, and upon the good ground as their brethren. Let Catholics, as citizens and politicians not be distinguishable from their other brethren of the commonwealth.” Later bishops, such as Archbishop John Ireland or Cardinal George Mundelein would stress the need for immigrant Catholics to assimilate into American culture, while at the same time maintaining a robust Catholic religious life. From here, Zielinski traces an evolution in the teaching of the Catholic bishops which describes a trajectory toward more engaged citizenship, including bringing the unique perspectives of Catholic social thought to bear through political participation. Father Zielinski will take up Bishop McElroy’s challenge of what must be done and offers ways to do it. In a second essay, Bishop McElroy asks the provocative question “Would the Good Samaritan have gone to war?” Virtually every exposition of the parable of the Good Samaritan draws the same conclusion. When asked “Who is my neighbor?” they answer everyone. Bishop McElroy plays out this interpretation and seeks to recover anew the Christian pacifist tradition. Especially in light of the technological evolution of war such that it is difficult to separate